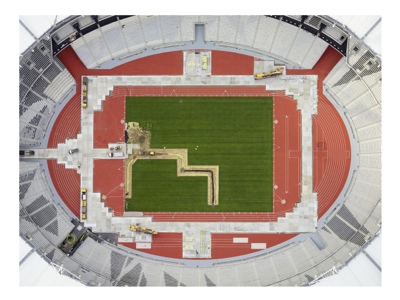 ‘E20 12: UNDER-CONSTRUCTION’ – a stunning visual essay by British photographer Giles Price will be exhibited as part of this year’s London Festival of Architecture, featuring within the festival’s King’s Cross Hub Showcase. Taken over two years in the run up to London 2012 – and the only set of photographs to document the development’s progress in this way – the essay sees Price combine a series of exclusive, large-format and minutely detailed, aerial images of the Olympic Park, with arresting portraits of its workforce.

The aerial landscapes are produced with the aid of the latest camera technology and, by pushing the boundaries of the language of satellite-imaging, they allow the viewer to experience a new way of seeing the construction of the site. The extraordinary detail of these images opens up a rare perspective of the development – revealing the intricacy of the build and the overwhelming scale of the site’s transformation.

Conversely, Price’s portraits of the construction workers introduce us to those, often-ignored, characters responsible for delivering the iconic Olympic Park and reconnect us to the human element of this landmark architectural, cultural and sporting project.

Together these photographs create a comprehensive, twofold narrative of the rebirth of East London, illustrating the immediate impact of the Olympics and offering an insight into the potential extent of its legacy.