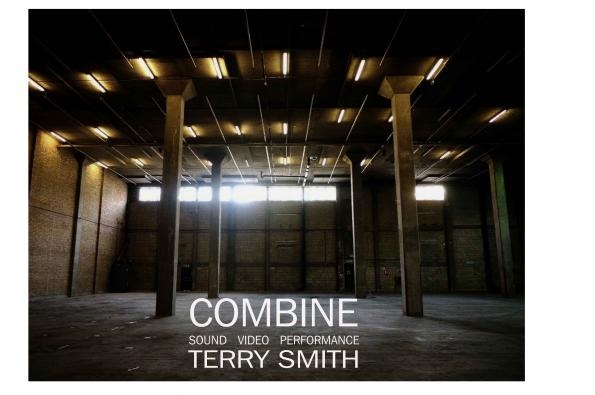 Combine is a new site specific work for video, music and dance by the artist Terry Smith.

‘The site and the physical situation are the most important conditions from which I construct a work. It’s a discovery and an experiment. Often I name a work in advance, to introduce myself to some concerns or issues that I might play with.

Combine was coined by Robert Rauschenberg to describe works which combined painting with objects to make works that were neither painting nor sculpture. He was also influential in sound and performance works. I have been looking and reading again through Rauschenberg’s work and the idea of taking on the idea of the combines really appeals to me.

Rauschenberg is one of those artists who is like an energy source, like the national grid, you can plug into him and re-energise.

I really don’t make work for mission statements; the value for me is in the challenge of making a work that develops and changes. It’s like making a painting; a detail in one place changes something somewhere else.’

Combine is constucted like a painting: a detail on one place changes something elsewhere. This is a work developed specifically for v22.

Smith, who was trained at Goldsmiths at the end of the 1970s, has always been influenced by a number of minimal and conceptual artists. Combine, inspired by the work of Robert Rauschenberg, also borrows ideas from Merce Cunningham, Bruce Nauman, John Cage and Pina Bausch. The term Combine was coined by Rauschenberg to describe works which combined painting with objects to make works that were neither painting nor sculpture. He was also influential in sound and performance, working with the Merce Cunningham Company as a designer and then moving on to making his own theatrical works.Combine is made in collaboration with the renowned British Composer Ian Dearden, who has sound designed works by Stockhausen and Steve Reich as well as his own compositions; with the Italian Choreographer Paola Piccato, who has studied in Turin and at the Laban Centre, London; and with Fari Bradley who is an Iranian-born journalist and electronic musician now living in London and an active member of London’s acclaimed ResonanceFM experimental radio station. Linda Hirst who has collaborated on two of Smith’s project Broken Voices and The Foundling. Linda has worked closely with Berio and John Cage, and sung around the world, renowned for her improvised singing. We are also pleased to announce the inclusion of music by Keegan DeWitt, an independent songwriter and award -nominated film composer based in Nashville. Keegan as written the score for a number of films including Cold Weather.

Smith continues his collaborative work with a new video/performance installation with the Cuban performance artist Marianela Orozco. Island is a work developed with the schools of music, dance and plastic arts in Havana.

Following on from Combine in July Smith’s work for singers Caracol will be shown in Caracas, where it was filmed last year. A new work Unsung will be premiered at Dartington Summer School in August. He is also working on a solo show of video works in Caracas for November 2012. Next year he is developing collaborative projects in New York, Cuba and London.

Combine is made with support from the Performance Studio, London. Commissioned by Tara Cranswick V22 Collection.