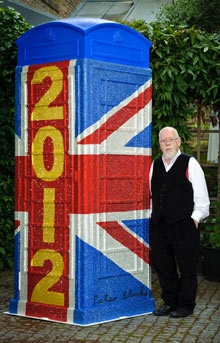 This article titled “Phone box covered in crystals is a ‘celebration of modern Britishness'” was written by Maev Kennedy, for theguardian.com on Thursday 14th June 2012 15.08 UTC

Anyone with an urgent call to make who approaches the spectacularly glittery phone box in the centre of London will find, as so often these days, that it doesn’t actually work. It may be some consolation to learn that it is a brand new work of art by Sir Peter Blake, and probably the shiniest to date, even for the man dubbed the father of British pop art.

Blake’s box, which has landed in the appropriately bling surroundings of New Bond Street’s luxury clothes and jewellery shops, is covered in 400,000 Swarovski crystals. The artist called it “a celebration of Britishness in 2012”.

It is not only the year of the Queen’s jubilee and the Olympics, but also a landmark year for Blake with his 80th birthday being marked by a retrospective of his work opening at the Pallant House gallery in Chichester next week.

His phone box is part of the BT ArtBox project, which will see scores of artist-decorated phone boxes springing up across London for the next month, including works by sculptor David Mach and fashion designer Zandra Rhodes, one transformed into a knitted monster by Lauren O’Farrell, and a clockwork box by the design collective greyworld which sprouts bunches of flowers at the turn of a giant key. They will then be auctioned to raise funds the charity Childline, which celebrates its 25th anniversary this year.

The phone boxes are based on the classic Sir Giles Gilbert Scott K6 box, a modification of his original K2 design topped with a royal coronet to mark the silver jubilee of George V in 1935. Surviving originals are now collectors’ items: the artists were given plain white fibreglass replicas to work on.