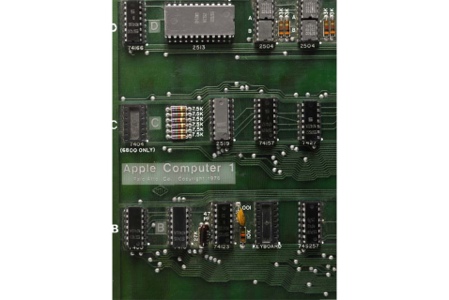 Sotheby’s New York is to offer an Apple I- an exceptionally rare working example of the first Apple computer with the original cassette interface, operating manuals and a rare BASIC Users’ Manual.

The Apple 1 heralded the start of the personal computing revolution by allowing users to type letters on a keyboard rather than through a panel of lights and switches. The device will be included in the Books and Manuscripts sale on 15th June 2012 and is estimated to fetch $120/180,000. ‘The Apple Computer’ was created by Steve Jobs and Steve Wozniak in 1976 and presented to the Homebrew Computer Club in Palo Alto the same year. It was dismissed by everyone except Paul Terrell, the owner of a chain of stores called Byte Shop who ordered 50 for $500 each which he then offered to the public for $666.66. Terrell insisted that the circuit boards come fully assembled rather than as kits, so Jobs and Wozniak built the 50 in just 30 days. When these were complete they continued working and produced a further 150 which they sold to friends and other vendors for the retail price. Despite being the most complete device of its type available at the time, the Apple I did not come with the monitor, keyboard, power supply, or case that constitute the modern computer.

Of these original Apple I’s it is thought that fewer than 50 survive, with only six known to be in working condition. Via: Art Daily