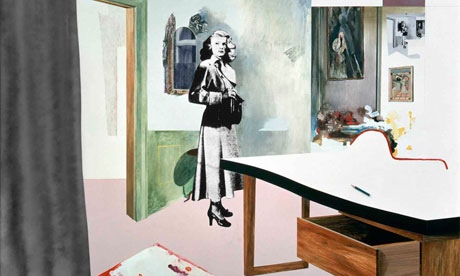 This article titled “Richard Hamilton: the Duchamp-ion of intellectual art” was written by Jonathan Jones, for theguardian.com on Monday 14th May 2012 15.07 UTC

Richard Hamilton richly deserves his posthumous exhibition at the National Gallery. The artist, who died last year at 89, was a champion of the intellect in a country that often prefers blunt empiricism to vaulting ideas. If Hamilton helped to invent pop art, he was also a conceptual artist powerfully influenced by Marcel Duchamp, whose work he interpreted and popularised.

It’s amazing, given the fame of Duchamp today, to think he was ever a neglected figure. In the 1960s he was rediscovered by artists, especially Hamilton, who meticulously studied and reconstructed Duchamp’s works. The Tate is lucky to own Duchamp’s most ambitious work, The Bride Stripped Bare by her Bachelors, Even – also known simply as The Large Glass. It is an allegory of desire, frustration and technology. In the upper of two glass panels framed in metal, a “bride” floats, disseminating heavenly smoke from her insect-like robot body. In the lower panel, her “bachelors”, moulded into rigid shapes by custom, grind their chocolate for her. Duchamp created this complex allegory in 1915-23. But the version in the Tate collection was created decades later, by Richard Hamilton, in 1965-6; he made a study of Duchamp’s original notes and drawings, collected in The Green Box, and constructed his new Large Glass from Duchamp’s ideas and proposals. It is a copy that was also a learning process. In 1966 Duchamp signed Hamilton’s reconstruction of his masterpiece.

Hamilton’s last exhibition at the National Gallery, which he planned before his death knowing he would not live to see it, sounds like it will be a Duchampian farewell. It culminates in a series of preparatory designs for a never-completed work based on Balzac’s story The Unknown Masterpiece. This tale about the artistic process also pays homage to another modernist hero, for Balzac’s story fascinated Picasso.

It is an exhibition about the process of making art, which for Hamilton was an intellectual process. His lifelong fascination with Duchamp led him in a very different direction from the way Duchamp is seen in popular culture today. He saw Duchamp as a philosopher whose works are elusive allegories of desire. He followed up his study of The Green Box with an edition of Duchamp’s even more abstract notes in The White Box. His own farewell exhibition will open up his mental world, just as he provided keys to the cerebral virtual realities of Duchamp.

Today Duchamp’s Fountain is his most famous work, but this urinal in a gallery is just the surface dazzle of what was in reality a very rich system of images and allegories. Hamilton saw dimensions to Duchamp that have yet to be popularised. He saw dimensions to modern life that are hard to express. He was a thinker, a visionary of the modern world.