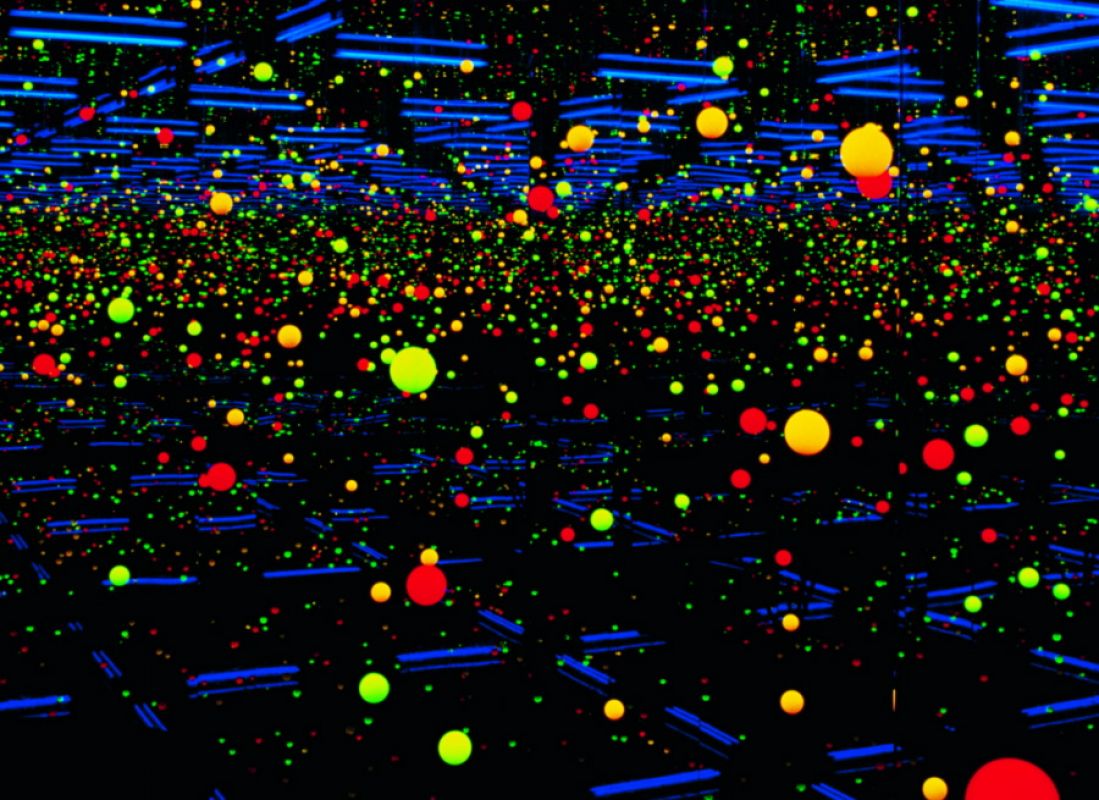 This article titled “Yayoi Kusama – review” was written by Tim Adams, for The Observer on Sunday 12th February 2012 00.05 UTC

All art is attention-seeking, but few artists have ever taken their demands to be noticed to the extremes of Yayoi Kusama. Now 82, and resident by choice for the past 35 years in a psychiatric care home in her native Tokyo, Kusama is currently seeing all her wishes come true. Not only has she been granted this obsessive-compulsive 14-room retrospective by the Tate, one of her career-defining Infinity Net paintings sold for .1m in 2008, a record for a living female artist.

Success did not come easily. Born in patriarchal and deeply conservative Japan of the late 1920s, even the idea of becoming an artist, as a woman, must have taken a supreme effort of will. To become an artist quite as liberated from convention as Kusama must have felt a lot like the insanity she has always feared – and to some extent nurtured – in herself.

Her autobiography, Infinity Net, translated for this show, traces, with suitably dreamlike intensity, the web of influences that shaped her and her art. As a child, she claims to have experienced hallucinations, and nightmarish out of body experiences, which she subsequently attempted to describe in paranoid, vivid paintings alive with eyes and threatening organic forms, some of which, from the 1950s, make an alarming and expressive opening to the exhibition. She seems to have been drawn to surrealism, but given it a less playful, more psychologically unbalanced field, an edge perhaps explained by the fact that at the same age as she was seeing her visions, she was forced by her mother to spy on her father in bed with his string of mistresses and geishas. She developed a loathing of phallic images, and an overwhelming fascination with voyeurism.

Her response to these disturbing, formative forces seems twofold: she sought a kind of self-obliteration, covering herself and everything around her with her trademark polka dots – there is, among many other spotted surfaces, a fabulously spacey suburban living room here in which the edges of objects, sofas and tables are blurred by primary-coloured circular stickers, picked out in a psychedelic light. Elsewhere, mirrored “infinity rooms” take these points of colour into more dimensions than the eye can easily cope with. Almost nothing has been immune from Kusama’s dottiness: horses and cats, buses and houses, trees and fields and rivers, she has camouflaged them all. Damien Hirst’s outsourced efforts look decidedly spotty by comparison.

Alongside these identity-denying projects she also sought to overcome her phallic anxieties with a workaholic kind of aversion therapy. For a long period in middle age, she painstakingly stitched together apparently infinite numbers of “soft-sculpted” penises, which, her autobiography suggests, she found perverse solace in lying down among. These forms, made from stuffed surgical-looking cloth, grow out of chairs and lamps, shoes and bookshelves. In one celebrated instance, Kusama covered an entire rowing boat with them, oars and all; the boat is given a room of its own here, complete with the 999 reproductions of the image which paper walls, floor and ceiling. Elsewhere, the teeming, faceless sock puppets create cacti-like forests, run wild, and coming at you from all angles – again, the psycho-dramatists of contemporary British art, Tracey Emin and Sarah Lucas, are made to seem somewhat lightweight in their neuroses.

Kusama arrived in America, having corresponded with Georgia O’Keeffe, in 1957. By the early 60s, she was exhibiting alongside Claes Oldenburg and Andy Warhol, both of whom she seems to have influenced, with her manic exhibitionism as much as anything. The 60s in New York, the mix of underground promiscuity and hallucinogens, were waiting for her, in a way. She became a self-styled shaman, organising orgies and happenings in which hippies lost and found themselves by painting one another’s nakedness with Kusama’s polka dots until the NYPD arrived, to clear up the mess. The human dot-to-dot events were captured on films, which gained an arthouse following, and which are oddly compulsive viewing now as ethnographic documents – like those early films of the lost tribes of Papua New Guinea – evidence of another, hairier, time and place altogether.

Kusama was a curator of these events, never a participant, except with a pot of poster paint; still, she returned to Japan in the early 70s carrying some of their generally good-natured lunacy with her, and checked herself into an asylum, where she has lived as an ostentatious recluse ever since. In recent years she has returned to painting canvases; large, vibrantly coloured pictures which play with her recurring vocabulary of eyes and roots and wriggling spermatazoa-like forms, and which taken together have a borrowed aboriginal quality. She came over for the opening of this show, a rare public sighting, and sat in her polka-dotted wheelchair, in her polka-dotted dress in the midst of all this colour, looking like a child in the internal landscape of her own making, half magic roundabout, half Freudian case study. You wouldn’t, you guess, want to live in this landscape full-time, but as a tourist destination, it certainly makes for a lively hour or so.