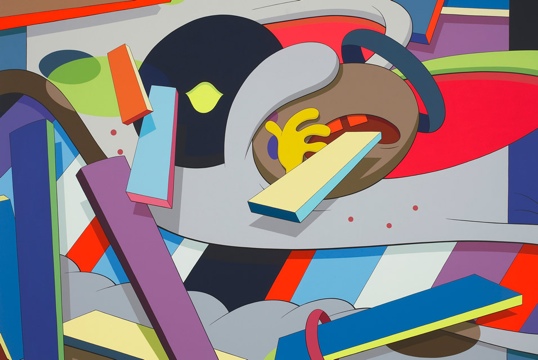 The FOCUS series is organized by the Modern Art Museum of Fort Worth and Curator Andrea Karnes for the Museum’s Director’s Council, a group that supports acquisitions at the Museum. Each FOCUS exhibition presents work by an emerging contemporary artist.

“KAWS,” is the subject of the first Focus exhibition for the 2011–2012 season. KAWS began his career as a graffiti writer in his hometown of Jersey City. By the time he entered the School of Visual Arts in New York to study illustration he had already developed an underground following. His painted-on interventions to ads in and around Manhattan were widely collected by aficionados of “street art.” His moniker, KAWS, also became well known through his street tags and explosive murals on billboards and trains. “KAWS was a name I started using when I was painting on the street,” the artist explains. “At first I chose it for the way the letters balanced with each other, but later I realized that by working under this name it becomes harder for people to form opinions about who is making the work and leaves them with just the work.” Throughout his career, he has looked to and borrowed from cartoon figures, advertisements, posters, television, and film to inform his imagery—from the Michelin Man to the Simpsons, the Smurfs, SpongeBob SquarePants, and Mickey Mouse.

KAWS’s work follows the continuum of Pop art, particularly the legacy of Andy Warhol, not only in its investigation of pop-culture imagery, but also in its thrust toward art as commodity with the artist as self-promoter. This method of trade is not without precedent and includes Claes Oldenburg’s The Store (1961), which introduced a new model for marketing art and products; and Keith Haring’s Pop Shop (1986), where he sold his memorabilia to everyone from graffiti kids to Madonna. More recently, Japanese artist Takashi Murakami examines this notion of artist as dealer and makes the sale of highly sought-after fine and commercial art products part of his practice. Like them, KAWS has forged alternative paths and built a vast global network for selling his work. In 2006, he opened a boutique, OriginalFake, in Tokyo, Japan. Blurring the lines between high and low art, and selling on all levels of the market, KAWS has been wildly successful. His signature Xs appear in his paintings and sculpture, as well as on apparel and special-edition toys.

FOCUS: KAWS will feature new work by the artist, including several new paintings from his ongoing KAWSBob series, and two new sculptures: Accomplice and Companion (OriginalFake). KAWS was born in 1974 in Jersey City, New Jersey, and received his BFA from the School of Visual Arts in New York in 1996. His work has been featured in numerous exhibitions, both in the United States and abroad.
www.themodern.org/ 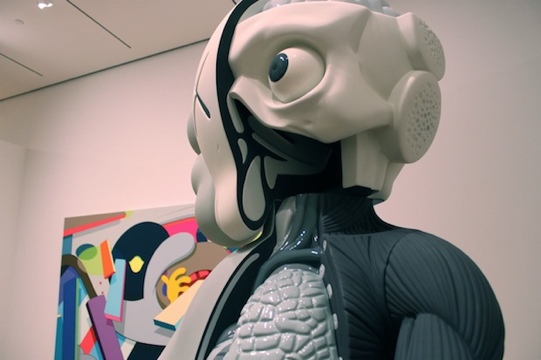