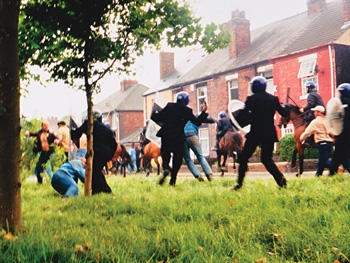 When Jeremy Deller sprang on to the national stage as the winner of the 2004 Turner prize – a dandyish figure clad in scarlet jacket and cravat – eyebrows were raised. He had not even taken O-level art at his London public school.

Sometimes his work – a re-enactment of the Battle of Orgreave in 1984, one of the fiercest clashes of the miners’ strike, or organising the ladies of the Women’s Institute to show flower arrangements at the Tate – did not look like art at all.

But now Deller is to have his first retrospective, as well as his first largescale exhibition in London, in February next year.

The show at the Hayward Gallery, titled Jeremy Deller: Joy in People, will bring together documents of past collaborative events, films, books and banners.

There will be a restaging of the exhibition he secretly put on in his parents’ house in 1993 when they were on holiday (he was 27, still living at home). And the facsimile of a greasy spoon cafe in Bury market called Valerie’s, originally made as a float for the parade he organised through Manchester in 2009, will serve free cuppas to visitors.

One person, at least, is bursting with pride: Barbara Deller, the artist’s mother, has contributed an essay to the catalogue, My Unconventional Son. In it, she notes that she did not know anything about the 1993 show in her house until a decade later, when she was reading a book by her son that contained “a picture of a toilet that I thought looked remarkably like mine. I read on to realise that it was no coincidence – it was my toilet”.

She also notes that “Jeremy’s artistic streak was obvious from an early stage” from his “playing Joseph in the school play”; and reveals an early interest in questions of scale. “Our kitchen had to be repainted after he created a 3ft long locust for a school project, only to find everyone else had produced something at actual size,” writes Mrs Deller.

But not everyone is so appreciative of Deller: “I tried to explain his work to the Queen when Jeremy took me to a reception at Buckingham Palace. I don’t think she quite understood, but she was too polite to say.”

According to the artist, the show will exhibit mostly work that has never been seen in London before, and Deller is working on new pieces, including “a nature film that I think will be quite visceral and overwhelming as a spectacle”. He also promises, darkly, that the museum attendants “will have more of a role than usual”.

The exhibition will open with a restaging of Open Bedroom, the show in his parents’ house, including the work that he put up in their lavatory – a transcription of the graffiti from the men’s toilets at the British Library. “It was a mix of super-brilliant academic minds and super-sexual frustration,” he said.

There will be a section on projects that Deller has failed to pull off – “abandoned Olympic projects, an idea for the fourth plinth in Trafalgar Square that was rejected. It’s meant to be encouraging. The ideas have often led to something else. And it’s human nature to want to see when you’ve fucked up”.

The exhibition will be curated by Ralph Rugoff, director of the Hayward. “Deller has opened up more new ways of working than any other artist of his generation – he is a game changer,” said Rugoff. “He has always done things in his own way: taking his art into the public realm and doing things that didn’t look like art, whether they were bumper stickers or T-shirts.”

Acid Brass, a 1997 work in which, at Deller’s instigation, a traditional brass band performed arrangements of acid house music, is regarded by Rugoff as “a turning point”. He added: “A lot of people work with groups, but it’s all very worthy but not that interesting. Jeremy puts his finger on things and touches nerves in the national psyche.

“He’s done things in a playful way, with a resonant, big imagination behind his work, that goes way beyond the art world and reaches a much wider audience.”

He has, according to Rugoff, “brought up questions of value” in his work. Deller emerged after the Young British Artists, who began exhibiting together in 1988, many of them wrapped up in the rising art market and collected by figures such as Charles Saatchi.

He has rarely made work that can be bought or sold straightforwardly. He has, said Rugoff, “heralded a new chapter when artists work as catalysts, producers, curators and collaborators … and with his interest in folk art and the creativity of everyday life he has brought attention to what other people have done”.

Jeremy Deller: Joy in People is at the Hayward Gallery on London’s South Bank from 22 February to 13 May