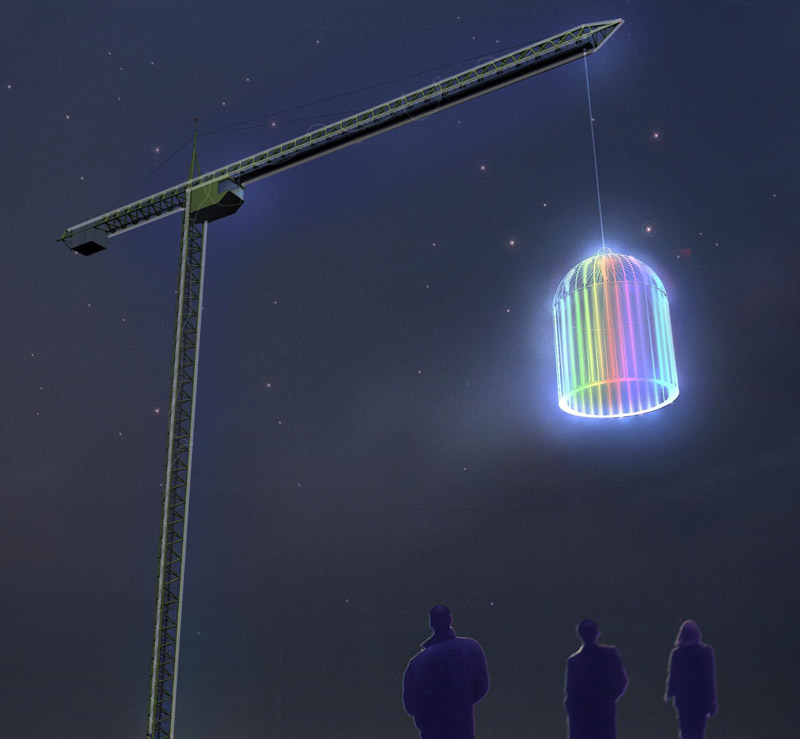 Visitors to King’s Cross will be able to scan the night sky for an intriguing illumination from mid-November, thanks to an artwork that will be hovering over the area for the next two years.
IFO (Identified Flying Object) will light up the sky by night and come to rest on the ground by day as part of RELAY, an art programme that is being created for the King’s Cross redevelopment.

Anglo-French curating partnership Michael Pinsky and Stéphanie Delcroix have been selected to coordinate the first three years of a nine-year arts programme that is set to turn the King’s Cross area into a destination for discovering international contemporary art. RELAY, the programme’s title, is inspired by: the carrying and preserving of the Olympic flame; King’s Cross as an international transport hub and a place in transition; the notion of the human chain – the transfer passengers at King’s Cross make from one means of transport to another – and the phasing of the development scheme.

The first RELAY installation, IFO, is by French artist and architect Jacques Rival. The bars of IFO’s 9m high, dome-shaped cage are wide enough apart to walk through, so visitors during the day can enter the cage and sit on the swing at its centre, enjoying the surroundings from this unusual vantage point. By night, the bars of the cage will be illuminated in a brilliant array of colours and once a month the whole artwork will be hoisted up into the air by the biggest crane on the site.

“Jacques Rival’s response to King’s Cross is both poetic and pertinent”, say Pinsky and Delcroix. “This nomadic sculpture follows the flux and flow of this new district which is evolving day by day. Over the coming months IFO will be found over coffee kiosks, amidst the construction sites, on buildings and, of course, in the sky. Its structure will host seminars, cafes, gardens and performances”.

The area already has a rich tradition of artistic activity and is a hub for art lovers, with Kings Place on the doorstep and 5,000 staff and students from Central Saint Martins College of Art and Design, part of the University of Arts London, now based in King’s Cross.

Anna Strongman, spokesperson for King’s Cross Central, says: “It’s great to have such an exciting piece of art created especially for King’s Cross. King’s Cross has always been of interest to artists and that is something we want to build on in the future with projects like this. This will add to the diversity and vibrancy of the site, which continues to come alive with the opening of the UAL campus, King’s Boulevard, eat.st and now the unveiling of RELAY.”

Jacques Rival trained as an architect. Jacques Rival creates monumental objects and ephemeral outdoor installations that play with the scale of our immediate environment and alter the perception of its immutability. He likes to intervene directly in the cityscape, taking ownership of sculptures, rivers and parks. For ‘I Love Lyon’, he appropriated the monumental statue of Louis XIV of Place Bellecour and wrapped it in an inflated snow dome. Merging the reality of the equestrian sculpture with its reproduction, he reconciled the aspirations of such long-standing homage with its vernacular use of as ready-made and disposable souvenir. Indeed, every day the sculpture is photographed by flocks of tourists who are keen to take it home. Rival writes: ‘Thanks to the snow dome effect, the quality of the site shifts from the picturesque to the ironical and magical, to the stereotypical. This project alludes to the symbolic power of this site (…), which is both a point of historical interest and a cliché. The over-sized snow dome is a souvenir of a present moment’. For the Lyon Festival of Light (6-8 December 2011) he will create a work involving balloons that contain illuminated vignettes.

RELAY is the first King’s Cross-led art programme. RELAY will feature three major art commissions by internationally acclaimed artists Felice Varini (FR), Marjetica Potrc (SJ) and Richard Wentworth (UK). The commissions will appear gradually in this new part of Central London, highlighting each new phase of the building process. The programme, running to November 2013, is being curated by Michael Pinsky and Stéphanie Delcroix. 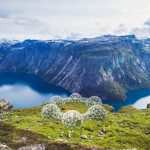 Artist Michael Pinsky is creating a series of domes containing pollution from cities around the world to test whether art can really change people’s perceptions of climate change.

Can Art Make Us Happy?