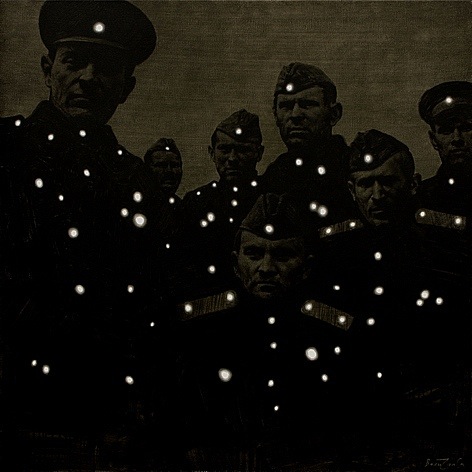 Erarta Galleries London is proud to present a selection of recent paintings by Rinat Voligamsi. Entitled ‘The Conditions of Winter’, the works are based on found photographs depicting scenes of Russian military life in harsh winter settings. While Voligamsi retains the monochrome colours and square format of early photography, the content of each image is given a characteristically uncanny, surreal twist – an alteration that is sometimes comical, often darkly beautiful, always oddly unsettling.

Human bodies, in particular, are subjected to all sorts of curious transformations: figures becoming duplicated, to appear as twins; or halved, so that legs march onwards without torsos; or completely inverted, with heads planted in the ground and legs waving helplessly in the air. The distortions are always mathematical, precise, and discrete, as if Voligamsi had somehow hacked into a sort of underlying computer code that determines the appearance of things, and introduced a glitch in the software. In other works, huddled groups of soldiers stare out at the viewer, the points of light from their starred caps or cigarette embers forming a map of the Great Bear constellation – the bear, of course, being a symbol for Russia itself.

Throughout the works, the constant, underlying theme is the power and authority of the modern nation state, particularly the Russian state. Voligamsi’s absurdist interventions can be seen as a kind of symbolic subversion of the system, a form of resistance against the tyranny of appearance and the way state seeks to regulate and manipulate its people.

Rinat Voligamsi was born in 1968 in Ermolaeva in Bashkir ASSR. In 1989 he graduated from the Architectural Department of the Ufa Oil Institute, before enrolling in the Red Army. In 1994 he was awarded the State Prize of Russia, one of the highest accolades an artist can receive. Voligamsi rose to fame in Russia for his provocative “unofficial album” project. The unofficial album creates a new path for Lenin’s life through original photographs deftly modified in Photoshop. The artist imagines that the leader of the world revolution didn’t die in 1924, but rather abandoned politics and started living as a good Muslim. 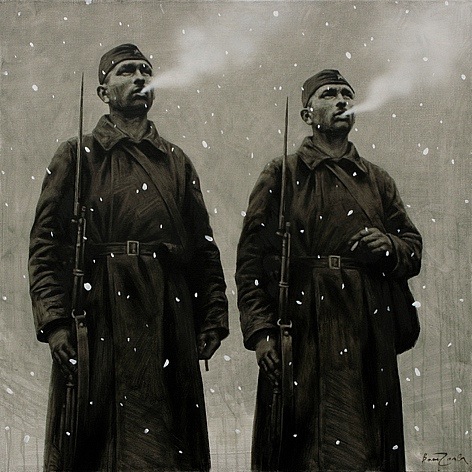