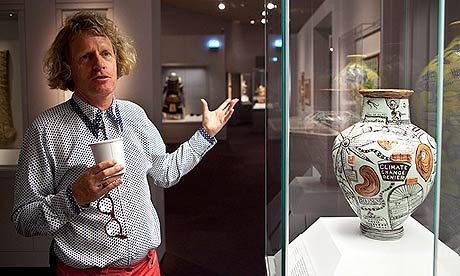 ‘Full of wonderful things’ … Grayson Perry’s The Tomb of the Unknown Craftsman. Photograph: Antonio Olmos for the Guardian

This article titled “Grayson Perry: The Tomb of the Unknown Craftsman – review” was written by Adrian Searle, for theguardian.com on Thursday 6th October 2011 10.18 UTC

“Part of my role as an artist,” writes Grayson Perry in the catalogue to The Tomb of the Unknown Craftsman, “is similar to that of a shaman or witch doctor. I dress up, tell stories, give things meaning and make them a bit more significant.” This is as true of Perry’s relationship to his own art as it is of his enthusiasm for the things he has brought together for this show. The objects he has selected from the British Museum‘s collection are significant enough already, even when their original purpose and meaning is obscure – and even when they are as formally beautiful as the Boli figure, a great bovine clay and mud creature from Mali, or as spare and complex as the criss-crossed canes of a sailing chart for the Marshall Islands in the middle of the Pacific.

Shrines, “magick”, pilgrimages, sexuality and gender, patina, texture and craftsmanship number among his themes. Each section could be a show in itself. We know, from Perry’s written texts and from his own work, that he is at heart a commentator in everything he does. Perry snuck up on the British artworld – if a 6ft tall motorcycling Essex transvestite can sneak up on anything – during the 90s, and won the Turner prize in 2003 for his slightly wonky, decorated ceramic urns. Yet he won it as much as anything else for being Grayson Perry. His art and persona are inextricably linked, just like Joseph Beuys, one of his heroes. Perry is nowhere near as a good an artist as Beuys, but his clothes are more fun. The more public a figure he has become, the more confident Perry has become as an artist.

A show that riffs on craftsmanship, artistic give-and-take, reading and misreading across millennia and the persistence of the past in the present is a risky business. It is as much about Perry himself as it is about the anonymous makers and distant cultures of the artefacts he has brought together, which include Roman rings decorated with tiny erect phalluses, 17th-century Staffordshire plates, 20th-century Japanese photographs of drag kings and queens, and a Mesopotamian relief of a couple in bed.

The show is full of wonderful things. His own iron sculptures of male and female pilgrims (with their swag of sewing machines, mobile phone necklaces, boomboxes and babies) have an ethnographic look, and are a fitting sort of homeless pastiche. His reworking of a 16th-century Rhineland jug, with the original’s oak leaves entwined with his riffs on second world war imagery, is a lively play on origins and history. Yet his Tomb of the Unknown Craftsman, a big iron coffin ship and the centrepiece of the exhibition, feels comparatively laboured as well as overladen with its cargo of cross-cultural references and glass phials of blood, sweat and tears.

I also find the shop full of Perry-designed merchandise at the end of the show an undignified comedown. But Perry largely pulls it off. Artists often make good curators: they have more at stake than most career professionals. I could have done with fewer of Perry’s own works, and less of Alan Measles, however fundamental this teddy bear is to Perry’s iconography. But it is a useful prop, a transitional object in Perry’s personal and artistic journey.