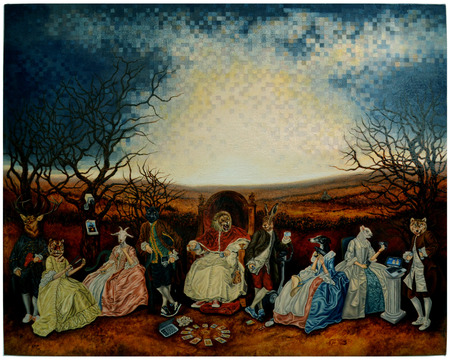 Taking nostalgia and utopia as her starting point, Thomas evokes iconic landscapes, often imitating the work of well-known artists such as Hayman, Zoffany and Gainsborough. By creating miniature facsimiles of Eighteenth Century paintings, Thomas is acknowledging and playing with issues of the original and the copy. Her ‘authentic replicas’ toy with ideas of reality and artifice and Thomas demonstrates a fascination with the history of painting while exploring her place within our digital age. In a reworking of the Romantic tradition, Thomas’
richly layered paintings explore the idealisation of nature and the quest for essential truth. In creating these fantastical compositions, Thomas causes a shift in perceptions; a moving away from reality and an entering into an entirely fictional world.

In her own words, Thomas’ paintings are ‘obsessively detailed to create an atmosphere of ‘Futuristic Nostalgia’. This dystopian world has been termed ‘Notopia™’ by Thomas, where surreal hybrid creatures populate a lost paradise, stripping down familiar ideals and presenting a virtual landscape. Thomas explores fragments of narrative and a shifting of time where once mythical creatures become genetically modified in a retro-futuristic collision of science and nature. A disturbing atmosphere of anthropomorphism and pseudo-science
permeates while an injection of wry satirical humour acts as a relief to these themes.

Lex Thomas has described herself as someone with a love/hate relationship with technology. She combines traditional techniques and computerized imagery, whilst also parodying man as machine. Thomas is particularly interested in the writings of Baudrillard, who describes this state so acerbically; where all is surface and style without substance and we are virtually disabled without our machines.
It’s a paradigm that suggests that in technologically advanced postmodern culture our consciousness is unable to distinguish reality from fantasy.

Thomas is passionate about the inherent value of an original work of art as opposed to a digital reproduction; her work is time consuming and labour intensive: from a preoccupation with the alchemy of grinding pigments and making glazes to the obsession with detailing and layering of paint. In this eagerly anticipated exhibition Thomas uses these methods to investigate the past in order to define the present and to portray a vision of the future that has become obsolete.

Lex Thomas has been working as a professional fine artist since graduating from a Postgraduate Diploma in Fine Art at Chelsea College in 2007. From a background in
Television graphics and Animation that led to BAFTA and Royal Television Society awards, Thomas has participated in various group exhibitions in the UK, including at the Royal Academy and Orleans House Gallery in London, as well as in Europe and the States.