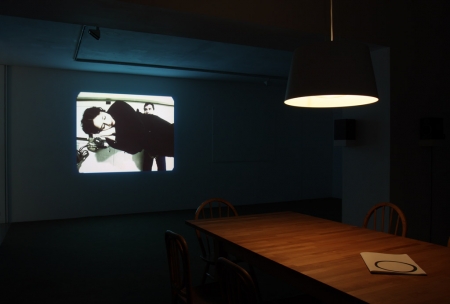 The Otolith Group is an artist-led organization founded in 2002 by Anjalika Sagar (b. 1968) and Kodwo Eshun (b. 1966) that integrates film, video, artists’ writing, workshops, exhibitions, publications and public programs. Centered on close readings of the image in contemporary society, their work explores the legacies and potentialities of the document, the essay film, and the archive, as well as speculative futures and science fictions.

The MIT List Visual Arts Center is pleased to present Otolith Trilogy, an interconnected series of films made between 2002 and 2009 that relate scenarios of a speculative future, projected from events in our recent past. Combining fictional narration with archival and documentary footage, the artists create a set of plausible predictive outcomes for the future, from life in the city of tomorrow, to the 22nd Century, when the earth is no longer hospitable to life. The three films Otolith I, Otolith II, and Otolith III show the possible effects of our past and present actions on various aspects of human experience and knowledge, including biology, space travel, urbanism, architecture, economics, media, and culture.
Video works will be on view in the Bakalar Gallery.

OTOLITH I otolith group I Video, 22:16 min., Colour, Sound, 2003 © The Otolith Collective
Otolith I is set in the 22nd Century, when the human race is no longer able to survive on Earth and is obliged to live in the microgravity conditions of the International Space Station. Dr. Usha Adebaran Sagar, the future descendent of Otolith Group member Anjalika Sagar, is an exo-anthropologist researching life on an earth that she can experience only through media archives. Otolith I imagines a mutant future that looks to the past to find the commonality between the post-war non-alignment movement in South Asia and the USSR, and the 2003 protests against the invasion of Iraq. Screening Times: 12:10PM, 2:30PM, 4:50PM 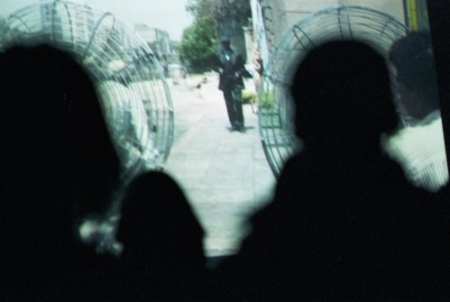 OTOLITH II otolith group II Video, 47:42 min., Colour, Sound, 2007 © The Otolith Collective
Otolith II is set in the near future and mixes fiction, archival material, and documentary footage filmed in Mumbai and Chandigarh. The film explores the affective pressure exerted upon inhabitants residing within contrasting and competing versions of the city of tomorrow. Otolith II investigates the politics of futurity in which predictive models of the masterplan, the corporate scenario, and real estate speculation converge to extract labor, convert attention, and capture potential for profit.

OTOLITH III otolith group III HD Video, 48 min., Color, Sound, UK, 2009 © The Otolith Group and LUX
Otolith III takes The Alien, the unrealized screenplay of the legendary Bengali director Satyajit Ray, as its point of departure. Written in 1967, The Alien would have been the first science fiction film to be set in contemporary India. Otolith III returns to 1967 to propose an alternative trajectory in which the fictional protagonists of The Alien attempt to seize the means of production in order to create the conditions for their existence as images. Filmed in London, Otolith III is an experiment in temporal and geographical displacement that The Otolith Group calls a premake, a remake of a film before the original.
Screening Times: 1:30PM, 3:50PM

Members of The Otolith Group will participate will participate in a conversation with art historian and critic TJ Demos, on the current conditions of politically engaged filmmaking and documentary representation, on Friday, October 21, 7PM Bartos Theatre. The program is organized by Scott Berzofsky with support from the MIT Program in Art, Culture, and Technology (ACT) and the Council for the Arts at MIT (CAMIT).

Last Chance to see : Reflections from Damaged Life. An exhibition on psychedelia at Raven Row