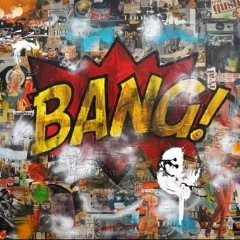 2nd September – 1st October, 2011
A major solo exhibition of new large-scale works by American artist Greg Miller will be opening at Scream Gallery this Thursday. Although Miller has been exhibiting regularly and to critical acclaim in the USA since 1975, Happy Ending is surprisingly his first solo exhibition in the UK. Miller uses collage and paint to create large-scale works, which explore the urban streetscape within a broader historical context. His monumental paintings and eye-catching installations serve to capture for prosperity the most intangible aspects of American culture.

His pop art-inspired painting Phantom Lady was a highlight of the Bonhams Urban Art Sale in January 2011, and he has donated work to the Macmillan de’Longhi Art Auction at Bonhams on 27th September. Miller will also exhibit on the Scream stand at the Moniker Art Fair this October. American art critic Peter Frank commented in an essay on Miller’s new series Happy Ending: “Greg Miller’s art has never been so raw or inelegant. There has always been a coarseness to Miller’s aesthetic, one that allows in rough edges and textures, not to mention images vaguely troubling in their sinister passivity. But in this series Miller brings to the fore the social and aesthetic anxieties that have agitated deep below his once-still waters.”

“In his new work…Greg Miller brings the pictorial poise of Pop to the eloquent fury of street art, effecting a marriage – or at least a torrid affair – between two hot items. One item is hot today, the other has been hot for half a century, but in Miller’s hands there is no generation gap, only a spiritual union – one that generates a sky, or at least wall, full of sparks.”?Peter Frank