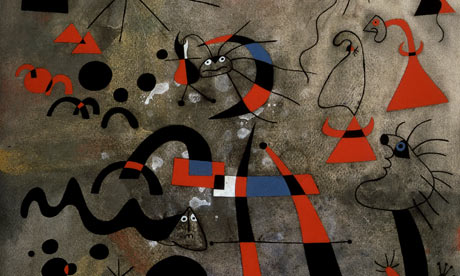 This article titled “Joan Miró’s art is more alive than ever” was written by Jonathan Jones, for theguardian.com on Monday 15th August 2011 12.08 UTC

There are just a few weeks left to see the Joan Miró exhibition at Tate Modern and if you are anywhere near the capital this summer, go straight there. Apart from anything else, the art of Miró is summery. It glows with the heat and intensity of Catalonia. His early paintings of farm and village scenes near Barcelona seem scorched into the canvas by an unforgiving sun: their sense of place is visceral, but not in the least conventional.

Even his most realistic depictions of medieval buildings in a parched landscape have a simplified power, and his obsessive scrutiny of surface details flows naturally into dream imagery that transfigures humble things.

The miracle of Miró is that he moves from reality to surrealism and even abstraction without missing a beat. This exhibition should make enemies of modern art think again. The most cogent and sometimes the most telling criticism of modernists is that they make an arbitrary, unjustified leap from realistic figurative drawing to abstract mayhem: abstraction is thus supposedly the mask of artists who can’t do the technical stuff.

I don’t see how anyone could describe Miró that way. His early rural paintings in this exhibition are profoundly beautiful, convincing and achieved. They are truly satisfying. What is amazing is to see how impulses from the unconscious gradually overcome everyday perception in his pictures without ever seeming falsely imposed: the artist who painted Dog Barking at the Moon (1926) is manifestly the same one who created The Farm (1921-2), with the same eye and the same soul.

Miró evolves before our eyes, with insouciant naturalness, from a detailed painter of the countryside to an artist of the inner eye’s carnival. His decision to make abstract dream paintings is totally convincing – that is, necessary, honest. His most ethereal constellations of fantastic marks have the same authority as his earthiest landscapes: this is one of the great vindications of modern art. Miró’s craziest daub has the truth to nature of Turner.

This exhibition sees Miró as a political artist, who fought through his images for Catalan freedom, the Spanish Republic, and human rights. Not all critics were convinced by this – the Sunday Times (pay wall) was sceptical – but I find it both a true and useful way of looking at him. Anyway, it takes us away from a leaden tale of how he met the surrealists, how he was influenced by Picasso, and so forth.

To see Miró as a political artist is not the full story – but it is a good way into his story. Here is an artist who never lost his curiosity or his engagement with the world. In his old age, he made art in support of the young protagonists of the May 1968 revolution. All his life, his art is raw, rough, and primitive – it is alive. Miró is a hero of creativity and a witness to art’s power for good. He is the artist we need now.