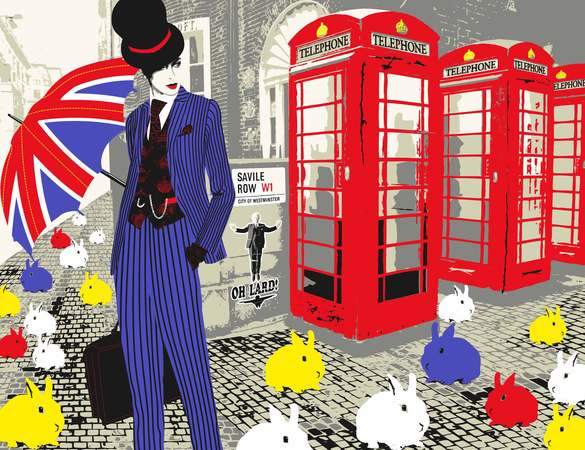 Based on a careful selection of London’s larger-than-life classic locations, artist Richard Ryan is releasing four silkscreen prints to celebrate the best of the cosmopolitan and timeless city that is London.

The portfolio, inspired by Ryan’s fascination for British culture showcases characteristic locations of the British capital including Savile Row, London Street, Victoria Station and the Parliament. Encouraged by Ryan’s early projections of the city, his first encounters with settings such as Trafalgar Square and Piccadilly Circus influenced the chosen sites and portray a naïve flirtation with the everyday life of London. 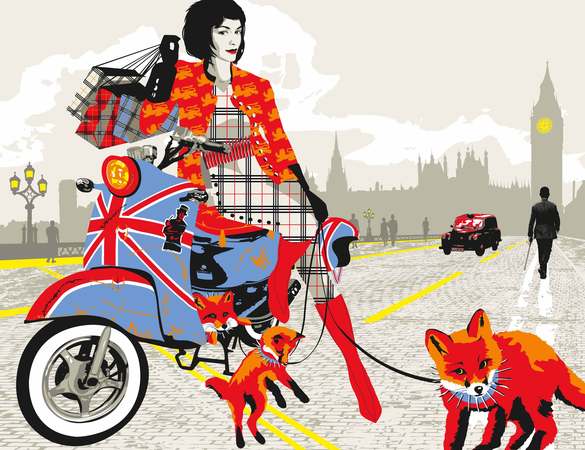 An unusual combination of absolute sophistication and its brutal opposite, these timeless London sites expose the romanticised essence of the city whilst also displaying the core that most visitors solely get to experience, both in a physical and mental sense.

Savile Row is the story behind the legendary tailors of London who represent the heart of the British gentleman’s traditional and flawless attire. The trademark of owning a tailored Savile Row suit is evident on any man, with other designs fading by mere comparison. The woman in the print wears a modified three-piece suit, as first introduced by Yves Saint Laurent who challenged the male suit typecast with his creations. A revolutionary design, the print represents the rebellious spirit of the creation, adding the top hat and Alice in Wonderland type motifs on the woman’s vest whilst also maintaining the spirit of the mythical dandy persona.
Shrouded in a Union Jack ball gown, the London Street print portrays a rebellious icon with a pink coloured Sir Winston Churchill peeping over the woman’s shoulder in the right corner, holding a machine gun and creating the perfect combination of an aristocrat and statesman – the ultimate Winnie the Pooh hooligan look. The typical British ‘oi oi oi’ wording can be found on the wall with a whiff of the infamous street hooligans. 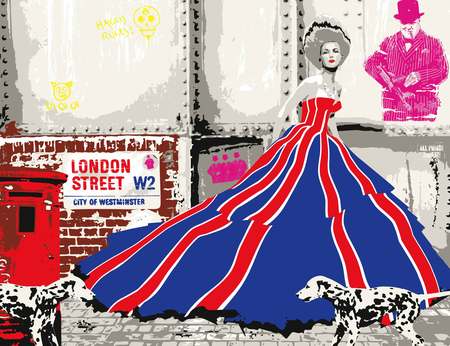 With inspiration from Damian Hirst’s mythical diamond skull, as seen on the passing red London bus, the London Victoria Station print calls upon the hype of modern British pop and art culture. Also encompassing a Swedish fashionista, originally photographed on the way for a lunch break by Ryan, he symbolizes Shane Meadow’s ‘This is England’ spirit coupled with the traditional houndstooth print, a trench coat and the policeman style hat. 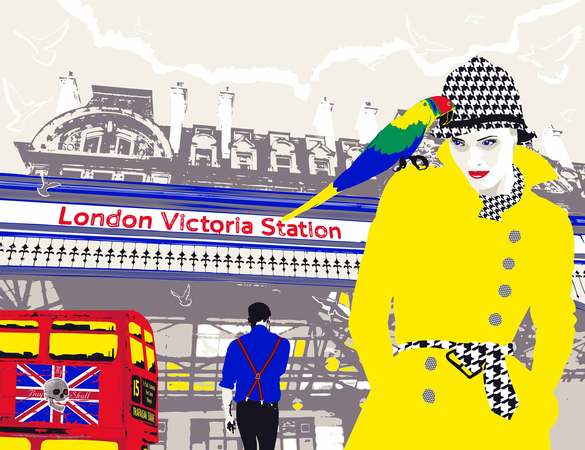 Finally, the Parliament was the last print to be created for the London portfolio. With Big Ben in the background, the woman on the scooter is envisaged to be the French actress Audrey Tatou, playing on the particular link between France and the United Kingdom. Holding a set of foxes on a punk inspired leash, this signifies the controversial fox hunting ban of 2002. Lastly, one can also find a Jack the Ripper sticker stuck on the scooter.

Depicting the trouble with truly getting to know London, the process of creating the four prints consisted of collating old photographs and other scrapbook items and putting the essential pieces together in order to reach a deeper understanding of the city. An artistic example of distance making the heart grow founder, the images also play on the notion that London in its might may be easier to enjoy and understand from a distance.