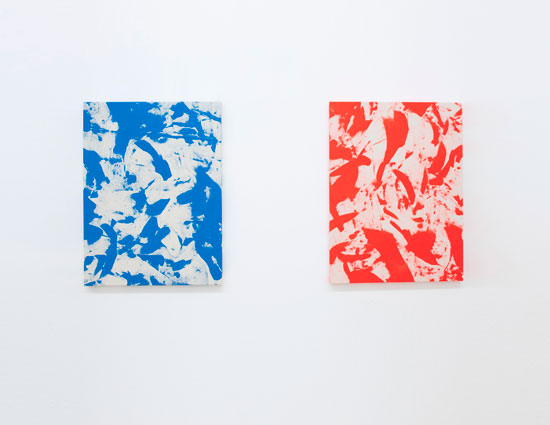 On Until 3rd September

A group exhibition with Gabriele Beveridge, Tomas Downes and Stuart Elliot.
Working across mediums of sculpture, photography and painting these three methodologically disparate artists are unified by their acute sensitivity to materials. The works displayed have an open and fragmentary nature that allows for conversation to flow freely between them. Yet this conversation is private spoken in whispers they do not dramatically seek the spectator’s attention but demand the spectator become attentive to them.

Multiple readings can be made between the works – the gestural surfaces of Stuart Elliot’s paintings mimic the images of ruptured concrete shielded under tinted glass in Tomas Downes’ floor sculptures. These in turn are reflected in the dappled faux granite and complex imagery within Gabriele Beveridges assemblages.

Drawing comparisons between the pieces forces the spectator to consider the space in-between making them receptive to their own physicality as well as that of the gallery space and the works that inhabit it.