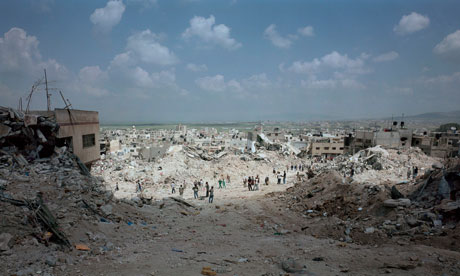 On a visit to Tate Modern last week, I wandered into a five-room exhibition of photography entitled New Documentary Forms. It continues until the spring of 2012, and includes recent work by Mitch Epstein, Guy Tillim, Boris Mikhailov, as well as Luc Delahaye.

It is a show about where photography has been and where it is going: about certainty and uncertainty, about ways of looking at and representing the world at a time when old traditions and labels – reportage, documentary, photojournalism – are constantly being blurred or subverted.

The most striking, and problematic, work is by Delahaye, a French photographer who used to do straight photojournalism, often up-close and graphic, but whose recent large-format, single-plate photographs from global conflicts have crossed over somewhat uncomfortably into the art market.

Delahaye’s journey is an interesting and illustrative one: he won the World Press Photo three times (1992, 1993 and 2001), the Robert Capa Gold Medal for reportage twice (1992 and 2002) and, uniquely, also won the Deutsche Börse prize for groundbreaking contemporary photography in 2005. Delahaye joined the Magnum agency in 1993, the year after he won his first Capa medal, and left Magnum in 2004, the year before he won the Deutsche Börse.

His more recent work, as the three images at Tate Modern show, is characterised by its size, detail and detachment. Here, as is the case with Robert Polidori’s photographs of the aftermath of Hurricane Katrina, art photography and photojournalism converge. Back in 2003, when Delahaye showed selected images from his History series at a private gallery in New York, including a beautifully composed portrait of a dead Taliban fighter lying in a ditch, he caused considerable controversy for mixing art and reportage, as well as for the attendant art-world prices the photographs commanded.

Delahaye, like Polidori, is not just questioning the role of reportage in an increasingly over-mediated world, but asking the thorny question: what happens to images of human suffering when they are taken out of magazines and hung on the walls of chic downtown galleries? In 2003, in a revealing interview with Artnet magazine, Delahaye said: “Photojournalism is neither photography or journalism. It has its function but it’s not where I see myself: the press is for me just a means for photographing, for material – not for telling the truth.”

The following year, Delahaye announced that he was no longer a photojournalist but an artist, and his work continued to echo the large-scale conceptual photographs of the likes of Thomas Struth or Andreas Gursky. At Tate Modern, there are no graphic images such as the dead Taliban fighter or his unforgettable photograph of a young blood-covered Bosnian girl lying wounded after a shelling. Their inclusion would certainly have put his recent work in a more dramatic context, but they would also have proved problematic when presented outside the context of an exhibition of war photography.

The images at the Tate are undeniably powerful, but in a more subtle, questioning way than his previous work. In their epic scale and detail, they evince an almost painterly sense of stillness that is utterly at odds with the devastation they depict. One, entitled US Bombing on Taliban Positions (2001), shows a plume of smoke erupting in the background of a wide desert scape. It is essentially a landscape photograph, beautiful even in its suggestion of death and destruction. Another wide vista is titled Jenin Refugee Camp, which captures the aftermath of the Israeli Defence Forces’ all-out assault on the camp in April 2002. Delahaye’s merging of art and documentary takes the viewer a world away from the often graphic horrors of war reportage, with its commonplace, usually tightly cropped, images of conflict situations.

In his 2003 Artnet interview, Delahaye said: “Reporters in the press see the Afghan landscape but they don’t show it, they are not asked to. All my efforts have been to be as neutral as possible, and to take in as much as possible, and allow an image to return to the mystery of reality.”

This phrase “mystery of reality” could be used about all great photography, from Henri Cartier-Bresson to Gregory Crewdson. But it has a certain resonance when applied to images of war (especially when applied to wartime images that make it from the page to the gallery wall).

Delahaye’s big pictures ask more questions than they answer about the increasingly blurred line between reportage and art, the importance of scale, and the tangible sense of detachment that characterises a certain strand of contemporary photography. Most of all, though, as the curators acknowledge in the show’s online catalogue, they “question the relationship between the documentary value of photography and the museum as its proper context”. As this work shows, that remains a vexed question.

Arab Revolutions is a timely show of dramatic photographs and video footage from the recent uprisings in Tunisia, Egypt, Yemen and Bahrain, as well as the fighting in Libya and Syria, featuring Guy Martin (Panos Pictures), Andrea Bruce (VII Network) and Dominic Nahr (Magnum) among others. At the Third Floor Gallery, Cardiff until 4 September 2011.