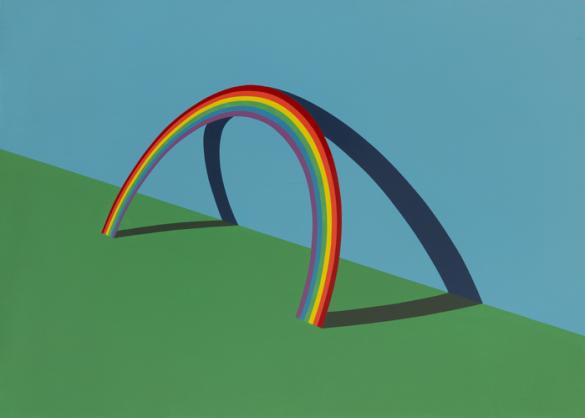 Flowers Galleries are proud to announce 50 Years in Show Business, a major retrospective exhibition celebrating Patrick Hughes’ life as an artist.
Aged just 21, Patrick Hughes held his first exhibition at the Portal Gallery, London, 1961. It was an immediate and critical success, lavished upon by art critic David Sylvester: “This artist has the gift synonymous with creativeness of being able to be surprised by what the rest of us take for granted. Here is a painter who really has something to say, and his arrival on the scene gives me a rare sense of exhilaration.”

50 years on, Patrick Hughes is one of the UK’s most popular and best selling artists, credited as being the ‘godfather’ of the UK surrealists, solely represented for over 40 years by Flowers Galleries. Flowers, Kingsland Road, will present a diverse range of iconic works which best represent the artist’s oeuvre, while a simultaneous exhibition New Works will open at Flowers Cork Street, from 14 July – 3 September 2011.

Included in the retrospective are workson loan from major private and public collections, i.e., Tate, Arts Council England; Patrick Hughes’ famous rainbow series, perhaps best known as postcards, of which millions of copies have sold. Also presented are early works especially re-made for the exhibition, including gloss paintings from the 1960’s. Flowers on Cork Street will feature Hughes’ ubiquitous three dimensional Reverspective images, which confound viewers by presenting those parts of the picture that seem farthest away at the nearest point. The visual effect is one of constant movement, as images, i.e., of Venetian waterscapes, seem to spring to life moving to and fro, inwards and outwards, cleverly animated by the motion of the viewer.

Of Hughes’ paintings, Colin Blakemore, FMedSci, FRS, Professor of Neuroscience, University of Oxford, says: “I shall never forget the first time I saw one of Patrick Hughes’ large Reverspective paintings, hanging at a distance in an exhibit about perception at the Science Museum in London, swinging and swaying to the tune of my movements as I walked towards it. It almost literally knocked me over. I’ve spent much of my working life thinking about the way in which the brain puts together different sources of evidence about the 3-D world. But while I think, Patrick explores. He has unashamedly trekked through the no-man’s-land between Art and Science, demonstrating the brain’s remarkable powers not with brain scanners and fancy equipment, but with stunning images that are personal in a very special way – responding to the command of every viewer. His work can be judged, and enjoyed, at so many levels. It raises questions just as profound about the mechanisms in our brains as it does about the nature of an artistic representation.”

Angela Flowers recalls “When planning my new Gallery in 1969, there was one artist who stood out as my golden choice for the opening exhibition – Patrick Hughes. His paintings, sculpture and graphics were brilliant, exciting, witty and thought provoking. He was a very important artist, and forty years later my opinion of him and his work has only been more enhanced.”