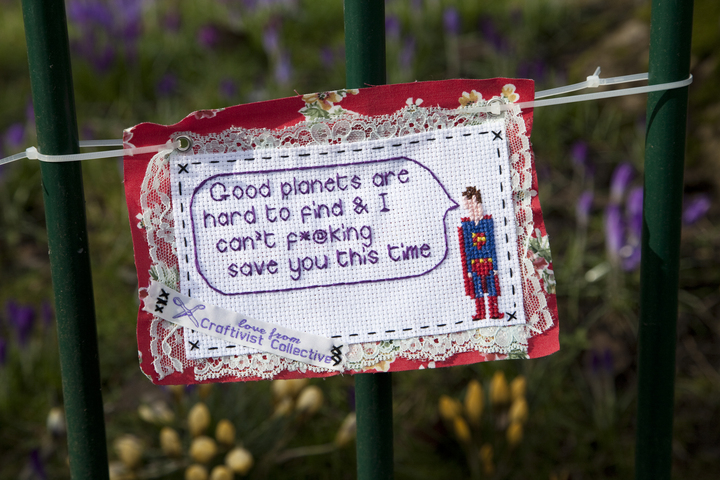 But what happens we get recomended an artist who doesnt have a studio does their work in public on Buses etc, An artist who is part of a collective so doesnt want to be seen as ‘the artist’ and then on top of all this – she’s not even sure she is an artist or that the work the collective does is art !

BUT we love this kinda thing at FAD Sarah and and the Craftivist Collective are artists of the best kind they want to use their work to make a difference to make things better to start a debate.

So we caught up with Sarah on the 22 from Putney to just outside Peter Jones. 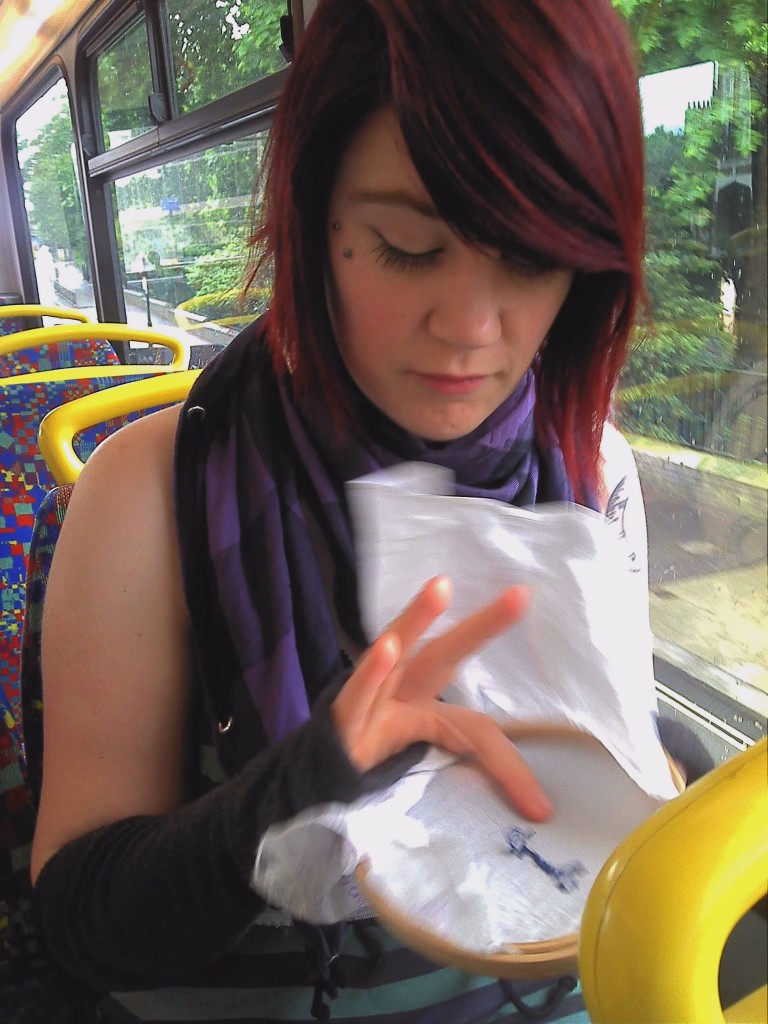 So why are we on a bus ?
We try and make sure that all of our craftivism projects can be created anywhere as an individual and/or part of a group especially in public places. It’s a great way to get even more people aware and talking about the issue you are crafting because people tend to be intrigued and come to us as asking what we are up to. We have found that people are more open to a discussion about justice issues if they initiate the conversation rather than if someone was shouting through a megaphone. Also people are more likely to leave thinking about some of the issues and (hopefully!) then discuss these issues with their friends, colleagues or family after they have chatted to us and even decide to act to challenge those injustices. 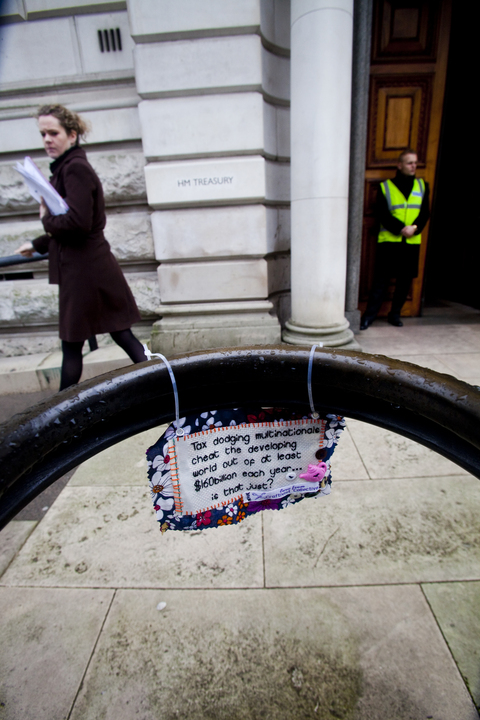 What is craftism?
Craftivism (you spelt it wrong) was coined by Betsy Greer in 2003 and she defines it as:
“A way at looking at life where voicing opinions through creativity makes your voice stronger, your compassion deeper and your quest for justice more infinite.” The term ‘craftivism’ is being used much more nowadays and sometimes used wrongly to label something such as upcycling, recycling or making crafts to raise money for charity. In our July 2010 interview with Betsy she wrote “I’m glad that Sarah [Craftivist Collective Founder] has really understood what I was trying to get at all those years ago. The heart of the idea is so important to me that it makes my day when someone else sees the same power in it that I do”

The quickest explanation of craftivism is “craft +activism = craftivism” but this can make it appear that the craft and activism are in equal parts, in reality, when the Craftivist Collective talks about craftivism, we’re normally talking about activism through craft or crafty activism.

Our manifesto is “To expose the scandal of global poverty, and human rights injustices though the power of craft and public art. This will be done through provocative, non-violent creative actions.”

Our view of what craftivism can be summed up in our catchphrase “a spoonful of craft helps the activism go down” (created by craftivist Rosa Marytn). Our projects are fresh and provocative but above all inclusive. We use the non-threatening and fun medium of craft to get people to stop, think and act on global poverty and injustice.

Our craftivism projects aim to challenge people’s views and reach out to those who may have not have previously accessed activism and groups for social change. We also target media outlets that may not cover social justice issues but would cover craft, art or fashion stories. If you check out our Publicity and Media section on this website you will see an eclectic mix of coverage

We often display our finished products (like the mini-protest banners or climate clocks) in public spaces to provoke passers by into thinking about the issue. But also, the act of creating a product – crafting something with a campaigning message – should provoke thought. Our projects aim to give people the time to stop and think about an issue while they’re creating something beautiful and meaningful. 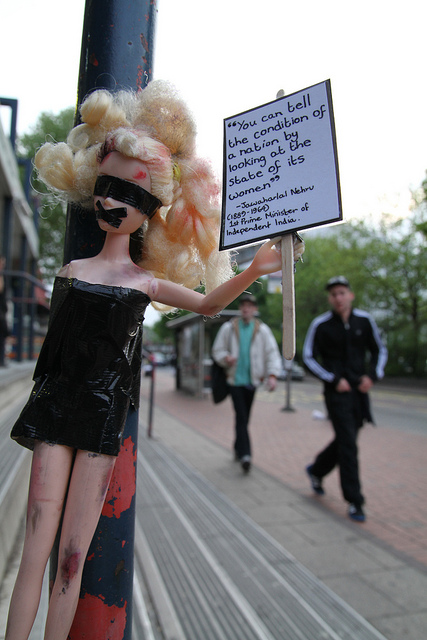 So is it art ? hmm that’s a difficult question. I think we see ourselves more as craftspeople than artists but I wouldn’t feel confident giving a clear yes or no. In many ways we are artists: we use our imagination and creative skills to create something visual which, hopefully provokes emotion in someone which I see as art. We don’t create art for arts sake in the sense that we don’t create something beautiful to be admired for it’s beauty: we create beautiful things to provoke people to think about injustice issues and discuss those issues with others so our global neighbours struggling are not forgotten. But saying that, our projects are very much about people putting time and energy into crafting one of our projects than creating their own new project so maybe that is less of an artistic act and more about crafting a copy of our projects. Does that make sense?

How did it start? I started the Craftivist Collective in 2008 as a reaction to comments and support I was getting doing my own craftivism projects in 2007 under the name ‘A Lonely Craftivist’. Lots of people started commenting on my blog, talking to me in person or on Facebook asking if they could join in so I decided to create the Craftivist Collective to cater to this need/want. I’m really proud that we can say that this collective is very much grassroots and organic. [We now have individual craftivists all over the world scattered around the UK and as far as LA, Berlin, Vancouver and Melbourne to name a few. Some people do our projects as individuals, others meet up and do them as events or as groups. We encourage all of the above. I delivers presentations and workshops all over the UK (Sheffield, Manchester, Bristol, Glasgow, London etc), we work in partnership with organisations we admire such as Tatty Devine, Fabrications, Better Transport and even comedienne Josie Long] 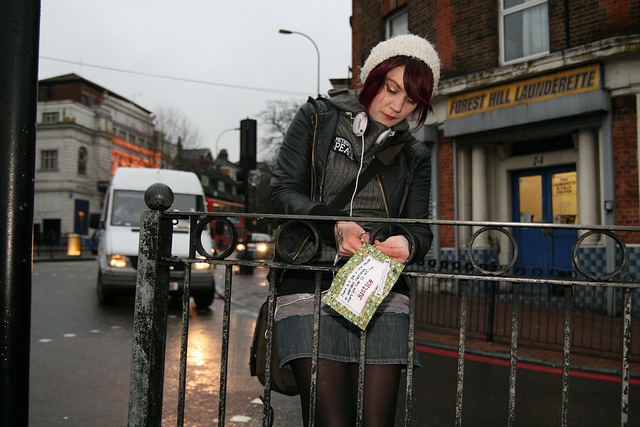 Sarah Corbett cable tying a mini protest banner up in a public place
Are you the leader ? I’m not the leader. I founded the group after people asked to join in and I felt it was a natural thing to offer those people. In he beginning someone was needed to coordinate projects, events and planning meetings but now we have a group of about 10 core craftivists. We meet monthly in the basement of the Tatty Devine Covent Garden (London) shop to discuss future projects, delegate roles and tasks and maintain the group. We make sure that everyone is happy with our plans before we move forward with anything. 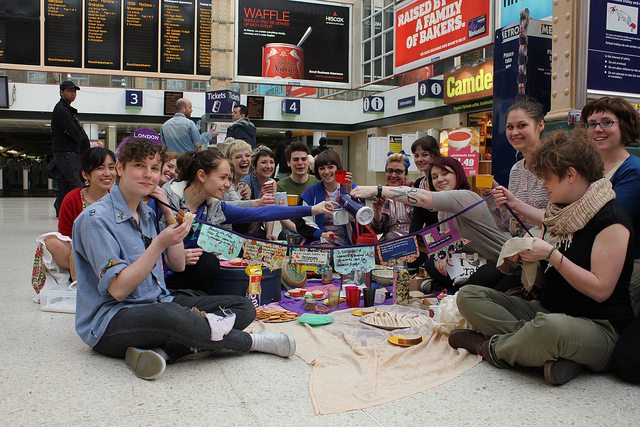 an example of a Stitch-In (indoors at Charring Cross)
Can people join get involved? Definitely! Our craftivism sessions are open to all. We also have craftivists across the world who have open craftivism events for people to join. We hope that our projects encourage others to duplicate them all over the globe and our website has instruction videos, images and templates to help people get involved wherever they are in the world. We want to show people that making people aware of the injustices and poverty in the world can be fun, fulfilling and can build friendships all over the world. It doesnt have to be stressful or elitest. Anyone can be a craftivist whatever their skill or understanding. We encourage craftivists to send us examples of their craftivism and their thoughts for our blog. You don’t have to be creative or an experienced campaigner. We work together on projects to make people more aware of injustices in the world and encourage them to act to make the world a better place. We want to build a craftivist army across the globe!

What are your plans for the future ? This summer we have a craftivism project called ‘Don’t Blow It’ where we are hand-embroidering messages for our local politicians onto handkerchiefs encouraging them to use their current power and influence for good and not blow their chance of making a real contribution to end poverty and suffering. We are also looking to create more kits and prints to sell in certain shops. We are working on our first zine/book of craftivism. Plus we will be filmed for french TV channel ‘Canal+’ (canal plus) in July where we will be creating Mini Protest Banners with the TV presenter in shoreditch on the theme of taxing the banks. The mini protest banners will be hung up around banks in Bishopsgate. We have been asked to have an exhibition in October amongst other requests, we are quite picky so will see what happens 🙂