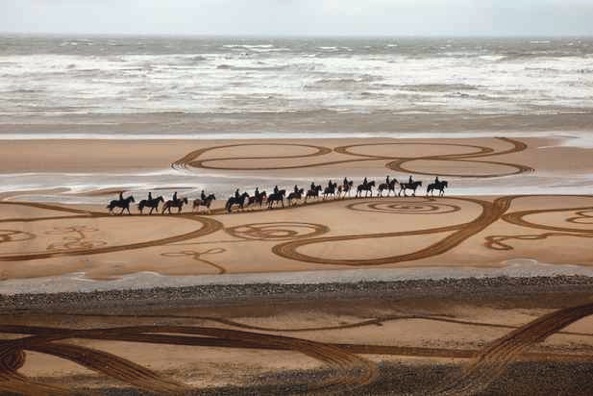 Walking Drawings: Across the Estuaries, a film and photography exhibition showcasing the landmark public art installation by artist Evewright, which took place on Silecroft Beach in Cumbria last year, will open in London from 29 April – 11 June 2011 at Four Corners, as part of the East End Film festival.

Walking Drawings are a series of live public art installations by London based artist Evewright. Over the last six years he has been creating large-scale drawings, using selected ‘sandscapes’ along the British coastline as his canvas. Using landscape tools and an old -fashioned tractor, Evewright creates his drawings in the sand and then invites members of the public to walk the lines in various formats to bring them to life. 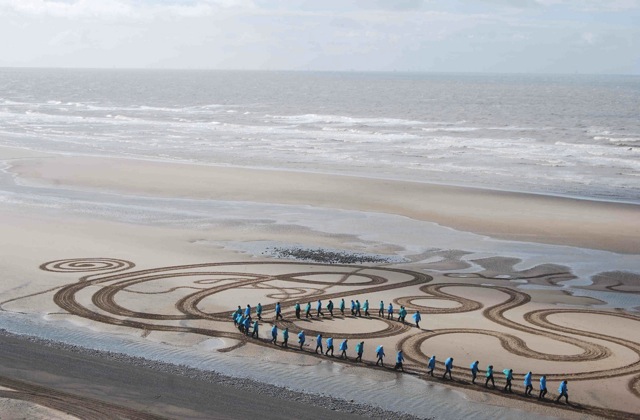 Over the course of two days in September 2010, Evewright battled 60mph gale force winds on his first day on Silecroft Beach in Cumbria to create his drawings using15 Shire horses and riders from local riding school, Cumbrian Heavy Horses. However, by the second day had perfect blue skies to enlist members of the public to bring his drawings to life.

The experience was captured on Redcam and high definition film and photography. The result is two stunning short films and a series of large-scale photographic prints. These will be showcased as part of the seven week Walking Drawings: Across the Estuaries exhibition, held at gallery Four Corners, London’s Centre or Film and Photography, from the 29th April in East London.

Evewright said, “Walking Drawings combines the elements – sand, sea, air – to create a new way of making, seeing and experiencing drawing. The Walking Drawings allowed those who took part to express their individual stories within the work, which in itself was both surprising and moving to see. The drawings are a conduit for bigger happenings which cannot be controlled or repeated but which are inherently beautiful. Showing this work in London locates this artistic landscape idea in the city.”

For more information on Walking Drawings Across the Estuaries visit the Evewright Studio website www.evewrightstudio.com

Artist and curator Raimi Gbadamosi will be hosting the talk, which will discuss the creative processes and artistic aims of the piece.

Evewright is an British artist from South-East London, whose work is a conscious ‘mash up’ of traditional forms of drawing, painting and sculpture, combined with digital technology and film. Evewright’s work explores the intricate connections between the body and our experience of the modern environment. He is best known for creating bold interactive art, using urban and rural landscapes as his canvas.

Evewright studied graphic design at Middlesex University, received a first class degree and continued on to train as an artist in mixed media painting at St Martins College of Art. He also trained in film and video production at Four Corners. With a professional background rooted in commercial graphic design, Evewright is an award-winning creative director, responsible for creating iconic imagery – in particular his branding for the group Jamiroquai. His commercial work has evolved by incorporating visual art into his practice.

Over the last six years he has been developing the Walking Drawings project, which is a series of live experimental art installations involving the public. Evewright creates large-scale drawings on the sands along the British coastline, which are then brought to life when the public are asked to walk the lines of his design.