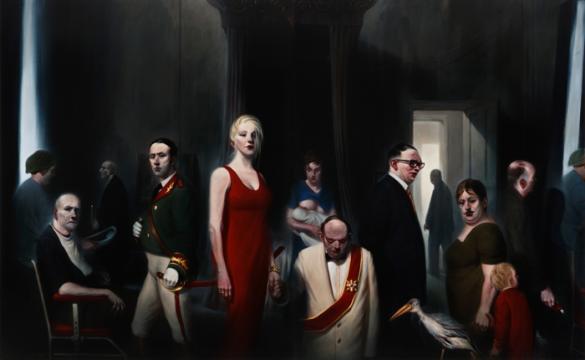 This exhibition of new work by Ken Currie can be viewed as a meditation upon the nature of portraiture itself, a series of claustrophobic and imposing paintings of fictitious power figures. The subjects while contrived are of a caste found in traditional commissioned portraiture. Here however, the artist is not reliant on flattering and kowtowing to his sitters. These subjects are of Currie’s own imagining and he is entirely at his liberty to show their vain and avaricious natures, without rebuke. Currie invites us to a performance of players preening as they grasp for status, unaware in their arrogance of the cadaverous figures that they in truth portray.

As with much of Currie’s work, these paintings demand attention but also leave the sitter with a tinge of unease. Blood drips down the putty coloured chin of a stale business man in The Reprieve, whilst he in contrast is concerned only with the deal he is striking, not the morbid state of his existence. This body of work in Currie’s hands becomes a series of personifications of the malicious intentions and selfish nature of humanity. There is no glass or frame to break the force of the patronising gazes between sitter and viewer.

The influence of the Spanish school can be seen in some of the works, in particular homage to Velazquez. In Chimera, Currie’s court, similar to that depicted in the great masterpiece, Las Meninas, the artist and his work are included within the piece as he paints and observes the scene. On the extreme right, one can see the left hand side of a canvas that is in fact the left hand side of the painting currently being viewed. It is a reminder that a painting is contingent and this grotesque clan, a cradle-to-grave collection of a family, are all within the artist’s power to destroy. He may seem to be a submissive figure as he looks on but the flash of his palette knife hints to the latent darkness within the characters and inside the pregnant spaces that encompasses them. The artist appears again as the backlit figure standing at an open doorway, looking through the cast of characters and out towards the viewer. Currie suggests the power of painting by creating something both rational and irrational, that exists and yet has no existence, that is real and yet a chimera. The spectator is left in little doubt of Currie’s opinion of these ‘deserving’ sitters and the world to which he alludes.

Just About the Size of It