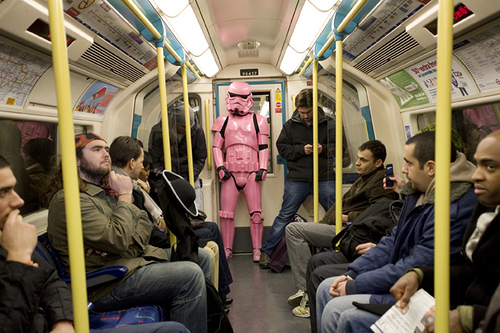 ‘Like most of the work I do I didn’t start with a plan and when it started I didn’t realise it was the start, and in the same way I’m not quite sure if or when it has finished. It really came about through the meeting of Andrew Ainsworth the creator of the original storm trooper from one of my favorite films Star Wars (1978). Friends of mine had told me about Ainsworth’s Shepperton Design Studios (just down the road from me) and the life sized storm troopers from Star Wars in the front window.

I decided to go and check it out. I got to know Andrew and his wife Bernadette pretty well and ended up doing some design work for them. He paid me in armour and helmets and very soon I was the proud owner of 2 of the dark side’s finest.

In 2008 Creator of the Star Wars trilogy George Lucas took Andrew Ainsworth to court in USA over the ownership and copy right of the storm trooper and won.
He then made his way over to the UK to try and stamp out the threat entirely and opened a £12million lawsuit against Ainsworth. Ainsworth appealed in the The Times for help. “I got calls from about a dozen good lawyers,” he said.

In December 2009 Lucasfilm failed to enforce its US copyright in Britain and the rest of the world (apart from USA) after the court agreed that even though Mr Ainsworth did not own the design, he had not broken any British law because his creations were ’not art.’

’Through this ongoing battle for ownership over one of the biggest icons of modern culture I found a name ‘ArtWars’. The way I saw it was that the multi billionaire production company LucasFilms based in Los Angeles California had
taken on the roll of the Death Star and had just lost their most trusted foot soldier to the rebel alliance played by Ainsworth’s Shepperton Design Studio.

This significant victory empowered the artist in ben and he has begun to see the white armour and helmet as a blank canvas. He started to work with different artists and designers to liberate these sub clones by giving them colour and identity, individuality and personality. It was now time to transform these guardians of the dark side into members of the rebel alliance.’

Since then Ben and the Art War alliance have joined protests at G20 and the recent campaign against cuts in London.

Pink Storm Trooper at G20 Demos from artbelow on Vimeo.