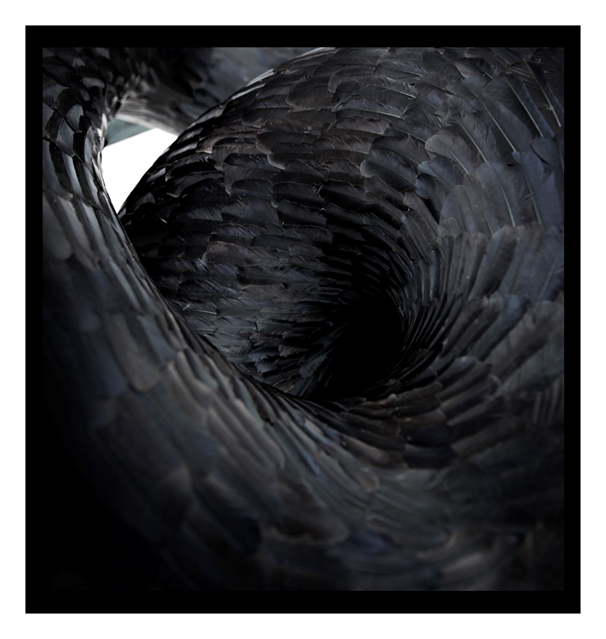 BOUND is the inaugural exhibition at All Visual Arts’ (AVA) new space at Kings Cross. Featuring new work by Alice Anderson and Kate MccGwire that tap into some of our deep-seated fears. 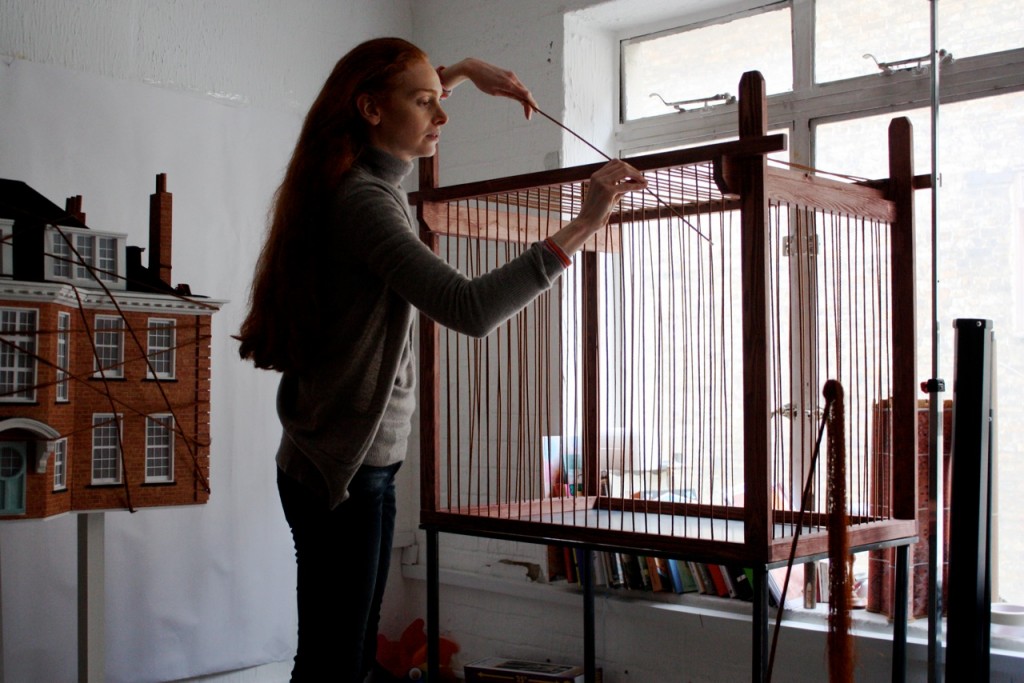 The space is dominated by two sculptures, one by each artist, specially commissioned by AVA. Anderson’s Fort-Da is evocative and autobiographical. MccGwire’s Corvid is the contrary, instinctual and without narrative. MccGwire’s Corvid is a writhing, serpentine formation made of crows’ feathers, a bird associated in folklore with thieving and deviant behaviour. By using archetypal shapes and materials that embody human qualities MccGwire is able to manifest different states of mind in physical form.

MccGwire works with pigeon, mallard and magpie as well as crows’ feathers, each of which prompt different cultural associations. The pigeon is regarded as ‘a rat with wings’, the magpie a thief, the crow a deviant bearer of bad news. (The crows’ feathers used in Corvid were sent to her by gamekeepers and farmers who shoot the birds to stop them damaging crops and fledgling birds.)

Anderson’s sculpture has its origins in a body of work that will be featured in her solo exhibition at London’s Freud Museum Alice Anderson’s Childhood Rituals (15 April – 5 June 2011). Fort-Da is a three metre high bobbin with ropes of red dolls hair wound around it. For Anderson dolls’ hair refers to her rituals enacted in childhood and symbolizes the link between a mother and her child. The bobbin becomes an emblem of the mother’s absence.

Anderson’s Fort-Da refers to a game invented by Sigmund Freud’s one-year-old grandson. The infant would throw a wooden reel attached to a piece of string over his cot and then retrieve it, a gesture he would repeat again and again. Freud understood the child to be saying ‘Fort’ and ‘Da’ (meaning ‘gone’ and ‘there’ in German), theorizing that the game allowed the boy to adapt to the anxiety caused by his mother’s absence. The game parallels one Anderson resorted to in her own childhood. In her version the wound hair tightly bonded to the bobbin becomes symbolic of her attachment to her mother, and the compulsive act of winding the hair, a way of facing the angst caused by her mother’s absence.

Anderson’s ambiguous relationship to the maternal – both protective and oppressive – incites a sensation of anxiety that is echoed by the ambivalent nature of MccGwire’s Corvid; on the one-hand appearing to be an inanimate mass of feathered rope, on the other threatening at any moment to spring to life
Corvid’s form is muscular and tensile, as if it has the power to restrain. Without beginning or end, it is like the pattern of our thoughts, endlessly repeating and turning in on itself, never coming to any kind of conclusion.

This endless repetition also appears in Anderson’s Fort Da, in the implied action of the compulsive winding of dolls’ hair around the bobbin as a substitute to ease the anxiety of separation.
www.allvisualarts.org/

All images: studio shots work in progrees in preparation for BOUND at All Visual Arts