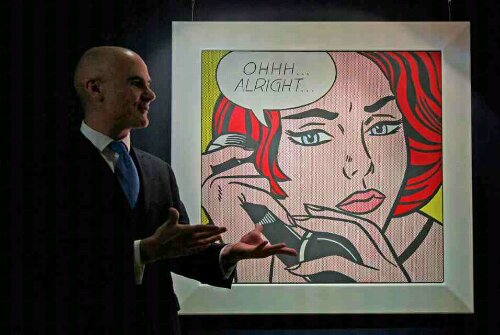 Christie’s International, the world’s leading art business, today announced worldwide sales for 2010 of £3.3 billion/$5.0 billion, up 53% by £ on last year’s figure of £2.1 billion (Figures include buyer’s premium). The highest sales total in the 245 year history of the firm, the figure is also the highest annual sales total ever recorded in the industry. Sales totals include private sales of £369.3 million/$572.4 million, an increase of 39% by £ on 2009 figures.

In a year of blockbuster sales and record-breaking results, Christie’s maintained its market leader status and sold 66% of the works over $50 million against its main competitor. It was also honoured to be the auction house of choice for some of the most significant collections to come to market. Collections from Mrs. Sidney F. Brody, Walter and Phyllis Shorenstein, The Andrew Lloyd Webber Foundation, Michael Crichton, Max Palevsky and others. Pablo Picasso’s Nude, Green Leaves, and Bust made art market history establishing a new world record for any work of art sold at auction when it sold for $106.5 million/£70.3 million. Christie’s sold 3 of the top 5 works of art sold during the year and a total of 606 works of art at auction for more than $1 million.

High sell-through rates at all price levels continued to demonstrate the strength and stability of the art market. In 2010, average auction sold rates (by lot) were 79.4%, on a par with 2009 (79.7%). Christie’s ability to secure successful results at the higher end of the market was demonstrated by sell-through rates by lot and value in excess of 90% for works priced between £500,000 and £10 million. Concurrently, the solid performance of our regional salerooms such as Christie’s South Kensington where sales totaled a record £104.1 million ($161.3 million) in 2010, demonstrates the continuing appetite for works of art offered at lower price levels.

“2010 was a record-breaking year and early signs of 2011 indicate that the art market remains buoyant at all levels,” said Steven P. Murphy, CEO of Christie’s International. “Christie’s worldwide team continues to reach and serve an increasingly global collecting audience as the market expands. Among the many notable results, the pace of growth in auction, the strength of private sales and increase in online transactions in particular indicate a growing appetite for participation in all forms and formats of art sales.”

Christie’s international growth strategy continues to deliver great results as the buying audience for art grows. Whilst the established markets still account for the greater proportion of new and existing clients and sales volumes: new client registrations from the UK and the US increased in excess of 40%, the Asian and BRIC economies are also contributing sales volumes and prices in 2011. In 2010, Hong Kong and China accounted for 7% of total new client registrants and the total number of clients in both regions increased by 28%, demonstrating their growing position on the international art stage.

Mr. Murphy concluded, “This has been one of the greatest years ever for Christie’s and the art market. The results of 2010 are the fruition of a decade of endeavor led by a strong and dedicated team. Christie’s remains dedicated to serving our clients, both new and established, being an innovator in the marketplace in terms of how and what we present in our sales and keeping art and expertise at the front and centre of our activities. We are well positioned to lead the ongoing expansion of the art marketplace as we look forward to a new decade.” Via:[ARTDAILY]