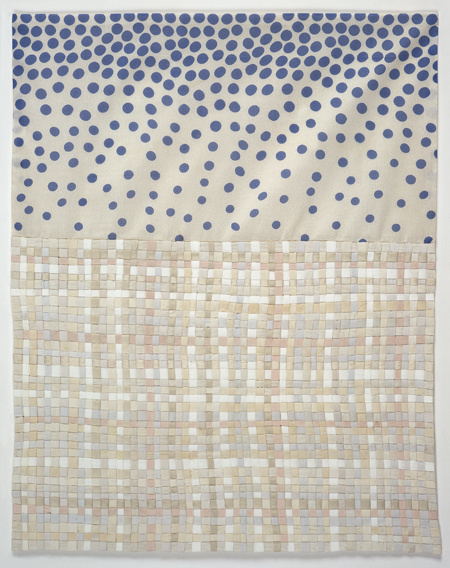 Curated by Germano Celant
Hauser & Wirth is proud to announce the inauguration of its new space at 23 Savile Row with a solo exhibition by the late Louise Bourgeois. The exhibition will feature over seventy fabric drawings made between 2002 and 2008, as well as four large-scale sculptures. Made from clothes and other domestic effects accrued over decades, Bourgeois’s fabric drawings are abstract yet acutely personal works, retaining allusions to the materials’ past incarnations. Curated by Germano Celant, the exhibition will travel from the Fondazione Vedova, Venice (5 June – 12 September 2010) to Hauser & Wirth London. The exhibition will be accompanied by a substantial catalogue published by Skira, which focuses on this major aspect of Bourgeois’s practice.

Fabric played an important role in Bourgeois’s life. She grew up surrounded by the textiles of her parents’ tapestry restoration workshop, and from the age of twelve helped the business by drawing in the sections of the missing parts that were to be repaired. A life-long hoarder of clothes and household items such as tablecloths, napkins and bed linen, from the mid-nineties Bourgeois cut up and re-stitched these, transforming her lived materials into art. Through sewing she attempted to effect psychological repair: ‘I always had the fear of being separated and abandoned. The sewing is my attempt to keep things together and make things whole’.

The fabric drawings are abstract and heterogeneous, deriving their formal logic from the juxtapositions of patterns printed on their materials and the artist’s long-standing motifs. Over a six-year period their designs evolved, exploring more intricate geometries and increasingly incorporating collaged elements. Stripy and chequered drawings that Bourgeois began making in 2002 weave thin strips of her garments together, bending the modernist grid. Later works adopt polygonal structures, stitching the fabrics so that the patterns form concentric circles and spirals similar to spider webs and the vibrant mirrorings of a kaleidoscope. Rather than being minimalist, these morphing geometries are supple and embracive, softly corporeal.

In juxtaposition to the drawings are three-dimensional pieces articulating an inescapable menace. The Cell, ‘Bullet Hole’ (1992), a black half-open, half-closed structure housing mysterious wooden orbs, bears the message ‘Fear makes the world go round’. ‘Peaux de Lapins, Chiffons Ferrailles À Vendre’ (2006), refers through its title to the traditional song of the street peddlers Bourgeois remembered from her childhood, yet its elements are unsettling: flesh-coloured forms hanging within a wire mesh resemble body parts – perhaps breasts or uteri or male genitalia – without being clear precisely which. Such suggestive ambiguity is typical of Bourgeois’s sculptures, enabling one thing to slip into and signify another, disturbing the viewers’ conceptions. This is particularly true of ‘Crouching Spider’ (2003), a key figure in this exhibition. Ferocious looking, the spider is also a creature who protects and repairs. In the earlier work ‘Maman’ (1999) Bourgeois explicitly used the spider as a metaphor for her mother who was an expert at spinning and weaving. Yet here amongst the wealth of woven, frequently web-like fabric drawings it’s clear that its symbolic reach goes further, standing for the artist herself.

For over seventy years, Louise Bourgeois (1911 – 2010) submitted her psychic life to intense examination, transforming her thoughts and emotions into a body of work of startling formal complexity. An extraordinarily radical and influential artist, her reputation as the most important female artist of our times was consolidated by an extensive retrospective of her work shown at Tate Modern (2007 – 2008) that toured to the Centre Pompidou, Paris, the Guggenheim Museum, New York, Museum of Contemporary Art, Los Angeles, and the Hirshhorn Museum & Sculpture Garden, Washington DC until May 2009. A major solo exhibition, ‘Louise Bourgeois: The Return of the Repressed’, will take place in South America in 2011, opening at Fundación Proa, Buenos Aires, in March and travelling to Instituto Tomie Ohtake, São Paolo, and Museu de Arte Moderna, Rio de Janeiro.

This exhibition will also mark the opening of Hauser & Wirth’s new space at 23 Savile Row. The space, which occupies over 15,000 square feet, provides an outstanding setting for larger exhibitions and more expansive installations. 23 Savile Row will be in addition to Hauser & Wirth’s existing operations at 196A Piccadilly and 15 Old Bond Street, as well as Hauser & Wirth’s Outdoor Sculpture programme in Southwood Garden, St James’s Church. The new space has been developed by architect Annabelle Selldorf, whose previous projects include Hauser & Wirth’s existing galleries in London, Zurich and New York, the Neue Galerie, New York, and the Sterling and Francine Clark Art Institute, Williamstown.