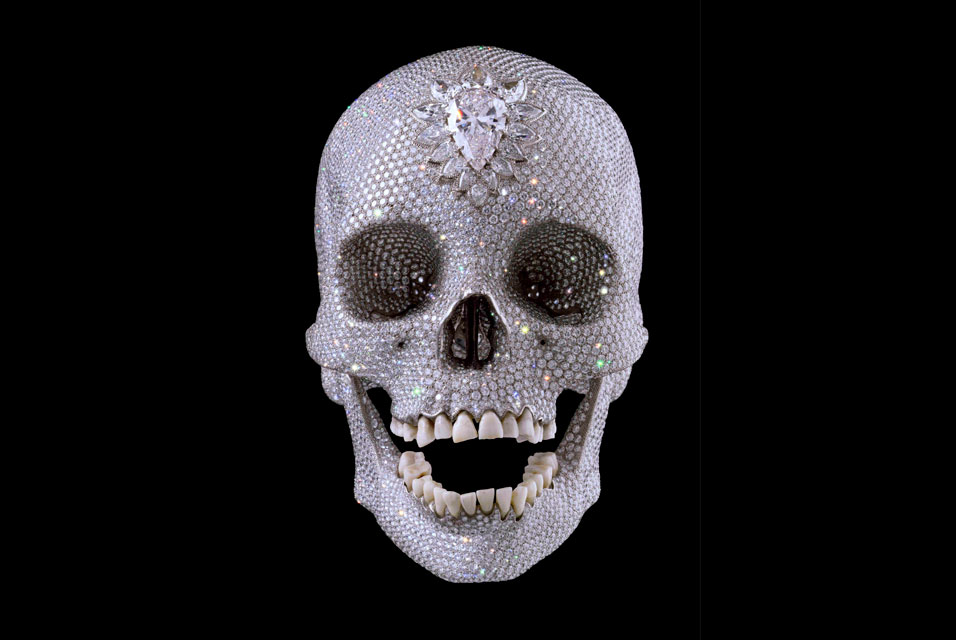 The diamond encrusted skull, For the Love of God, by British artist Damien Hirst, which gained iconic status following its first exhibition in 2007, is on display at Palazzo Vecchio in Florence from 26 November 2010 to 1 May 2011.

Promoted by the Comune di Firenze, Assessorato alla Cultura e alla Contemporaneità and the Musei Civici Fiorentini, the event was conceived by Memoria srl, is curated by Francesco Bonami and is being produced and organised by Arthemisia Group.

For the Love of God is a life-size cast of a human skull in platinum, entirely covered by 8,601 VVS to flawless pavé-set diamonds, weighing a total of 1,106.18 carats. Set into the forehead is a large pear-shaped pink diamond, known as the Skull Star Diamond. The teeth are those of the original skull, which was purchased by Hirst in London, and dates back to the eighteenth-century.

The work stands in the great tradition of the ‘Memento Mori’, where an image or an object serves to remind us of our mortality. Dutch art historian Rudi Fuchs, writing about the work in 2007, observed: ‘The skull is out of this world, celestial almost. It proclaims victory over decay. At the same time it represents death as something infinitely more relentless. Compared to the tearful sadness of a vanitas scene, the diamond skull is glory itself.’

Palazzo Vecchio is the historic seat of the Florentine government and one of the great masterworks of art and architecture of the Italian Renaissance. Palazzo Vecchio’s lavishly decorated rooms, which were designed by Vasari, hosted the court of Duke Cosimo I de’ Medici. For the Love of God is displayed in the Camera of Duca Cosimo, in a unique encounter between the Medici Palace’s ‘room of wonders’ – a masterpiece of Florentine Mannerism created between 1570 and 1575 – and Hirst’s tour de force, For the Love of God.