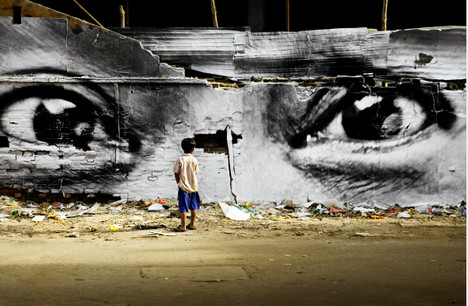 JR wins TED prize ($100,000) for his exhibition “Women Are Heroes” which has been shown on slum housing in Paris, bridges in Africa and the walls of favelas in Brazil. 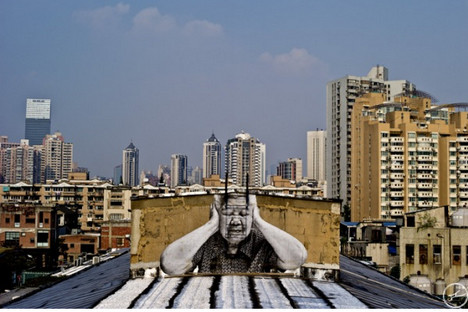 “Women Are Heroes” is a fantastic exhibition of huge-sized photography superimposed and pasted on the sides of buses and trains, up staircases and on top of roofs. The show is a tribute to women who are “dealing with the effects of war, poverty, violence, and oppression globally.” JR wants to celebrate the dignity of these women who are living with the bare minimum. 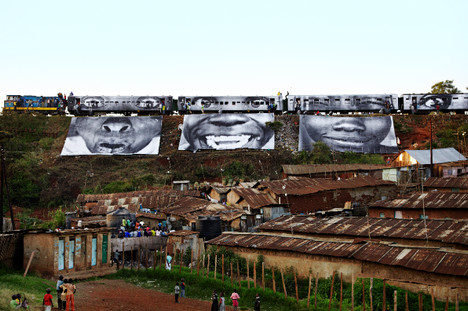 He has travelled to cities as diverse as Rio de Janeiro, Phnom Penh, Delhi, and several parts of Africa where huge blow-ups of women act as a back drop for day to day activities. In Kenya, the over sized photographs, printed on waterproof vinyl, doubled as new roofs for ramshackle houses.

JR then photographs the people–they become the models–and it becomes an exhibition which travels to galleries in Berlin, London, Amsterdam and New York. He also made a film Women Are Heroes and this year it was shown at the Cannes Film Festival.

His identity is a mystery, although we do know that he is 27 and Parisian. He calls himself a “photograffeur” (graffeur is French for graffiti artist). He takes no corporate sponsorship for his work, instead funding it with the money he makes by selling his art in galleries and at auction. 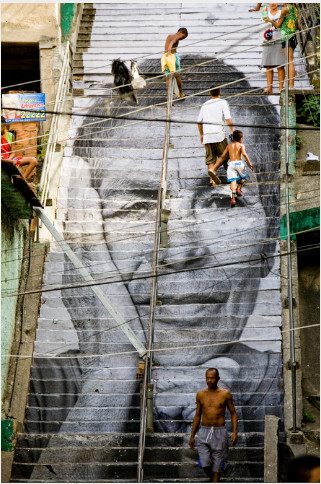 The TED Prize is awarded annually to an exceptional individual who receives $100,000 and ‘One Wish to Change the World’. After several months of preparation, the winner unveils his/her wish at an award ceremony held during the annual TED Conference. The “wish” inevitably draws donations and other help from the organization’s corporate partners and influential supporters. For example, the 2010 TED Prize Winner Jamie Oliver’s wish was: “I wish for your help to create a strong, sustainable movement to educate every child about food, inspire families to cook again and empower people everywhere to fight obesity.”