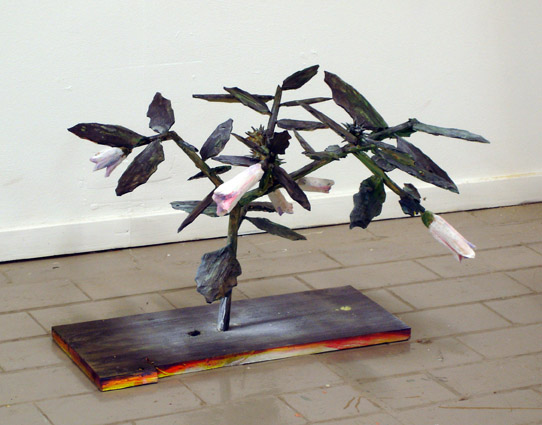 The tendency for contemporary art to reference the darker side of the human psyche as a response to our troubled times has been prevalent in recent years and has led to many artists referencing imagery that has a direct relationship with death, gothic aesthetics and apocalyptic themes and that has often felt contrived and superficial.

The group of artists presented in ‘Dark Nature’ references those dark themes with a singularity that suggests their relationship to their world is far from a pose. This is work that has a quietness and subtlety and whose near obsessive qualities suggest it could be made in a bedroom whilst listening to Sabbath albums…. backwards. That is not to say there isn’t a knowingness in this work. It is there, and seems to be hard won by constant exploration and the marriage of their chosen mediums with the intensity of the subject matter, resulting in works that possess an atmosphere and directness, whilst leaving space for reflection.

Mats Adelman’s drawings, watercolours, sculptures and films explore the area where the urban and natural world collide and suggest an intimate relationship with nature that hints at desperation. He asks the question – are we imposing on nature or is nature colonising us? Referencing folk sculpture and a backwards D.I.Y aesthetic we are presented with disquieting wooden sculptures of birds that feel too menacing to approach and bird houses as wrecks constructed with splintered wood.

There are hybrid sculptures of leaves, flowers and wings, twee at first glance, menacing on closer inspection; and watercolours of decrepit desolate cabins where a loner seems to live, suggesting a state of mind as much as a place.

Roger Andersson’s watercolours reference illustrations of fairytale stories or botanical diagrams. However, there is something darker lurking underneath as if a kind of decay is permeating the beauty. Again, referencing those areas where human activity encroaches on nature there is something strange going on in the undergrowth. In this show he presents a new body of work comprising of watercolours made from the rust of an old saw he has renovated. The same saw has been used to make small wooden sculptures of what look like teenagers in the act of contemplation, but the viewer cannot tell what the subject is about to do.

Justin Bartlett’s detailed pen and ink drawings draw from nature and imagery related to the occult resulting in works that show an analytical eye that pushes the iconography he uses to the limit. The seemingly innocent drawing of a cat shows a struggling bird trapped beneath its paw. The cat’s expression is maniacal and deranged. Other works draw on Bartlett’s rich visual language of dark chasms, piles of skulls and heads floating in rancid pools engulfed in a mass of knotted weeds and roots. The resulting hellish images, while referencing nature seem to come from a much darker internal void. Justin will be showing new original drawings.

Paul Housley’s intimate and expressive paintings of banal subjects present us immediately with a question. It is hard to know if they are still life or portraits. Some are paintings of paintings by Goya, Velazquez or Rembrandt for example, from cheap reproductions rendered in swift marks that seem fragile and awkward but perfectly descriptive. The images are on the verge of collapse but still recognisable. Less lofty subjects include china cats and birds, cheap trinkets given the same importance as their art historical partners. All these images bear an emotional substance that belies their humble status in the real world and hint at the transformative power of painting.

Dark Nature suggests both the artists’ relationships to the natural world, and to the intangible way information is transformed through the creative process, to produce work that exudes a heavy and melancholic emotional weight.

Dark Nature is curated by James Aldridge who is an artist living and working in Sweden and is represented by Poppy Sebire. His next solo exhibition in London at Poppy Sebire Gallery will take place in January 2011. Dark Nature is the fourth exhibition in the exciting new programme of exhibitions at Poppy Sebire Gallery. Without fixed premises, the gallery takes on a new Central London space for each
exhibition. Updates about new locations and exhibitions of our nomadic ’space’ are posted regularly on the gallery website.