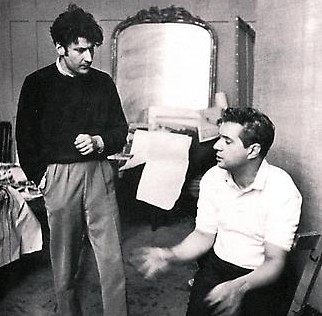 Gagosian Gallery is pleased to present the exhibition “Crossing the Channel: Friendships and Connections in London and Paris 1946-1965,” which examines the vibrant exchange of ideas and influences between Francis Bacon, Lucian Freud and Alberto Giacometti in Paris and London during the postwar years.

This exhibition spans the period from 1946-the year that the international borders reopened–to 1965, when the Tate Gallery presented Giacometti’s retrospective. During this time, the web of friendships and alliances between artists, patrons and collectors from London and Paris proved to be enormously influential. It was Peter Watson — the important British collector and patron of the arts as well as a founder of the Institute of Contemporary Arts in London — who connected Bacon, Freud and Giacometti as well as collecting their works, providing stipends and organising exhibitions, including retrospectives for Giacometti and Bacon with the Arts Council of Great Britain in 1955. In Portrait of Peter Watson (1954), Giacometti paid homage to this dynamic and instrumental patron.

The eldest of the three artists, Giacometti was, to some extent, the trio’s imaginative lynchpin. With Watson’s assistance, Freud travelled to Paris in the mid-forties, where he met Giacometti and sat for two portraits. Giacometti first visited London in 1955, where he witnessed the still-devastating effects of the War. Although he did not meet Bacon until the early sixties, his influence on the younger artist is evident in works such as Miss Muriel Belcher (1959), whose sculpted facial features and dark, abstracted background recall devices that Giacometti used in paintings and sculptures of Annette and Diego.

Bacon and Freud became close friends around 1943. Each chose to paint only their most intimate friends, although Bacon worked exclusively from photographs while Freud painted from live models. Freud’s portrait of his future wife Lady Caroline Blackwood, Girl in Bed (1952) was one of the many paintings that travelled with him between Paris and London. In John Deakin (1963-64), Freud portrayed the renowned photographer whose images of Muriel Belcher, Isabel Rawsthorne, George Dyer and others became the basis for many of Bacon’s paintings. Bacon also painted a series of portraits of Freud from Deakin’s photographs as counterparts to Freud’s portraits of Bacon.

The exhibition is accompanied by a fully illustrated catalogue with an essay by Pilar Ordovás.