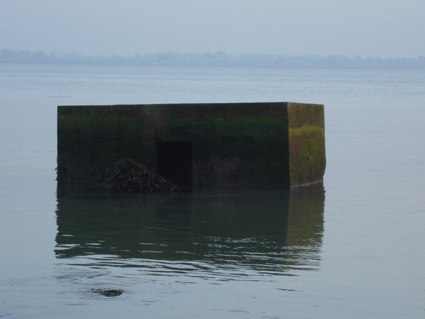 Studio Voltaire is pleased to announce a new large-scale commission by the British sculptor Phyllida Barlow, as well as a large number of recent drawings presented in the project studio. This exhibition coincides with the artist’s two-person show with Nairy Baghramain at The Serpentine Gallery (8 May – 13 June 2010).

The new commission at Studio Voltaire will include a series of works that directly respond to the gallery’s unique architecture and interior landscape. Dominating the space will be two long structures from one end of the space to the other, mirroring the dark, beamed ceiling of the gallery. These barrier-like forms also reference different structures we might encounter in our everyday lives that control or navigate us, as well as our surrounding nature – ramps, walls, barricades, sea groynes etc. Reciprocating these two objects will be a wall piece that has the qualities of an enclosed balcony shrouded in a blue tarpaulin – an object which is in a state of flux, which could be finished or in the process of being finished. Another 3 smaller works based on security cameras will hang from the cross beams of the ceiling, acting as observers of the environment.

Barlow’s recent work emerges from a 40-year practice in which she questions the nature and role of the sculptural object in contemporary culture, utilising an extensive, fluid vocabulary and immense enthusiasm for engaging with the physical ‘stuff’ of the world. Barlow makes her work from a range of materials, such as tarpaulin, wooden pallets, cement, polystyrene, card, plaster and chicken wire, and after construction many are painted in industrial or synthetic colours. Although abstract and often absurd, the sculptures have a strong sense of referencing existing objects, the relationship to the body and narrative.

Phyllida Barlow (Born 1944, Newcastle upon Tyne) has been teaching since the 1960’s and has proved an influential presence in a number of British art colleges and her former students include Rachel Whiteread, Steven Pippin, Douglas Gordon, Spartacus Chetwynd, Bill Woodrow, Angela De la Cruz and Eva Rothschild. In recent years her work has achieved a new visibility with the publication of the monograph Objects For … And Other Things (Black Dog, 2005) and a number of solo exhibitions and commissions across the United Kingdom, including STINT, Mead Gallery, Warwick (2008); New Sculpture: In the Gallery and Grounds, New Art Centre, Roche Court, Sailisbury (2007); Scape, Spacex, Exeter (2005) and Peninsula, Baltic, Gateshead (2004). The artist has an ever increasingly presence internationally which her inclusion in a number of group exhibitions including Kunstmuseum Basel and Bergen Kunsthall (both 2010) and a forthcoming solo exhibition at Kunstverein Nürnberg (2011).
www.studiovoltaire.org/