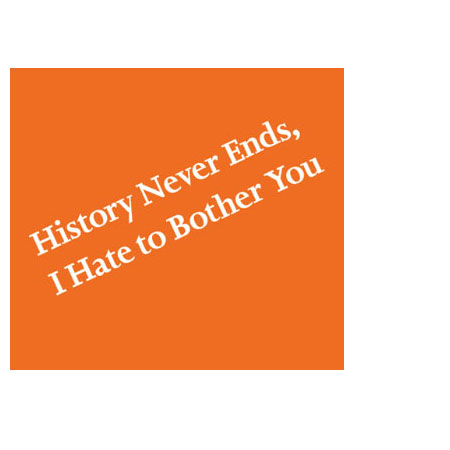 The show’s title may furthermore be read as a sardonic refutation of Francis Fukuyama’s famous postmodern thesis ‘The End of History?’, which proposed the end of ideological conflict after the collapse of the Soviet Union and advocated the spread of liberal democracy.
In the main gallery, Durant has customised a globe of the variety found in classrooms and libraries. Suspended on a steel cable, it is devoid of any identifying text – its continents reduced to nameless landmasses – with the exception of England, which has the usual names left in place. The globe mordantly reflects the Anglocentric world view that underpinned early colonial expeditions and the attendant notion of ‘unchartered territories’.

It critiques the nineteenth century view that “England opens all of its ports; it has broken down all the barriers which separated it from other nations; England had fifty colonies, and now it has only one, the universe…” [1]. The emptiness of the globe is paralleled by its minimalist presentation within a seemingly empty space. Yet a second work stealthily pervades the gallery with a scent of burned wood, melted plastic and scorched metal: Durant has redeployed a domestic ‘Aromax’ scent diffuser to evoke urban apocalypse.

On display downstairs is a series of maps from various sources onto which quotations have been stencilled in spray paint. A number of the maps are literally inverted, and elsewhere the quoted text is painted upside down or transformed into a mirror image – reformulating Galeano’s impassioned demands, “Is justice right side up? Has world justice been frozen in an upside-down position?” Durant’s technique recalls agitprop banners, yet the fragments of text – suspended out of context in ambiguous relation to the maps – are pregnant with implications. Karl Marx’s “All that is solid melts into air, all that is holy is profaned” in The Communist Manifesto (1848) is superimposed on a map of the British Isles, in an oblique indictment of British ‘nationhood’.
Middle East (NIMA and Gitashenasi maps) juxtaposes two maps of the Middle East – published respectively by a US government agency and an Iranian cartographic institute – and overlays them with the words of the seventeenth century pilgrim Robert Cushman: “But some will say, what right have I to go live in the heathen’s country?”. Tellingly, Cushman’s apparent self-doubt turns to a vindication of the colonial mission – as revealed by The World (Defense Mapping Agency), which reproduces his tract at length. Durant points obliquely back to the historical origins of Western self-justification and highlights the endurance of imperialist behaviour in international politics. At the same time, these new works arguably reveal their artist as part of the imperial project and its historical cycles. The implication of both artist and viewer in the works serves to overturn the idea that history is over and that one can stand outside of it.

Sam Durant lives and works in Los Angeles, California. Recent solo shows include Dead Labor Day at Paula Cooper Gallery, New York, and This is Freedom? at Blum and Poe in Los Angeles. In 2009 he curated Emory Douglas: Black Panther at the New Museum, New York. Other recent solo exhibitions have been at Massachusetts College of Art, Boston; Museum of Contemporary Art, Los Angeles; The Walker Art Center, Minneapolis; and the Wadsworth Atheneum Museum of Art, Hartford, Connecticut. His work has been included in numerous group exhibition such as the 2006 Busan Biennial, Korea; the 2004 Whitney Museum of American Art Biennal, New York; the 2002 Venice Biennale, Italy; and Out of Place: Contemporary Art and the Architectural Uncanny at the Museum of Contemporary Art, Chicago.

In his latest exhibition Jim Lambie will present a body of work – spanning sculpture, video and installation