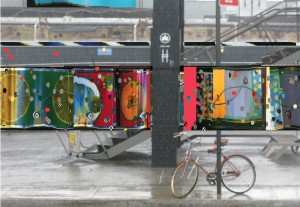 To celebrate their new location of downtown, on the corner of Gansevoort and Washington Streets in Manhattan’s Meatpacking District, the Whitney Museum is assigning three artists to create three large scale works on the site of their future building, in bright, summery images calling it ‘Whitney on Site: New Commissions Downtown’. The three artists; Barbara Kruger, Guyton\Walker and Tauba Auerbach, all of which have a rich history with the Whitney, will use vinyl decals fabrics to create their works on which will be dotted around outside and inside the building.

The new site will debut at the Whitney’s American Art Award dinner on May 6th 2010. Whitney on Site: New Commissions Downtown will open officially on May 8th and run through until June 23rd 2010.
Via:[SLAMXHYPE] 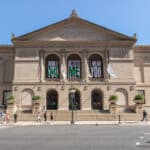 You can see a new work by Barbara Kruger, Untitled (Who?) (2020), installed on the facade of Sprüth Magers Los Angeles gallery now until mid-January.