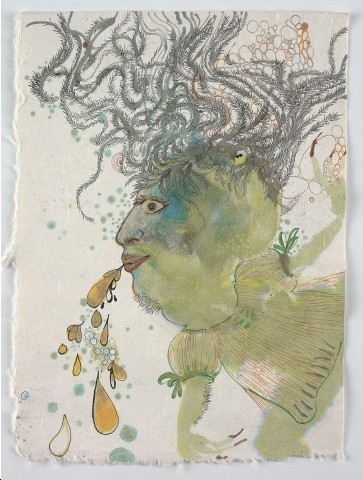 Banerjee’s drawings, sculptures and assemblage depict mythical, visionary worlds, reflecting the artist’s Western and Indian backgrounds with intense colours and hybrid flora and fauna. The fantastical floating world Banerjee creates is reminiscent of Indian miniature paintings, and comes from an interest in Victorian culture; the thirst for exploration and knowledge, lust for the travel and curiosity in the “other”. The work explores specific colonial moments that reinvent place and identity as complex, diasporic experiences. The work’s aesthetic and cultural beginnings underline how our perceptions of place, home, foreign, domestic and the exotic are ‘stained’ by the specific cultural properties of the objects that fill them.

Banerjee’s sculptures are typified by her sensual and suggestive use of a wide variety of found objects, both artificial and natural, and her deployment of complex and unusual spatial configurations. Her sculptures often hang, or are cantilevered out from the walls, seemingly weightless, incorporating stitching, weaving, scattering and binding, entangling boundaries between object-making, sculpture and craft. Architecture is a repeated concern, and Forever Foreign will include the work, Take me, take me, take me….. to the Palace of Love, a large-scale fabric work depicting a levitating and diaphanous pink Taj Mahal.

Certain motifs recur throughout her work, chiefly the umbrella which constitutes an important reference to her native Kolkata and in shape reminds us of natural forms such as trees and mushrooms, plus in use it demarcates private space and the outside world. Banerjee’s vision is one in which objects and images slip between the cultural and man-made, the natural and organic. Other recurring motifs include shells, eggs, and skulls, and boldly coloured fans. The works often have wild and poetic titles such as Tortoise and ivory, cinnabar, a single lustrous pearl all of it sprayed money as if it where new gold, which hint at the opulent materiality of her visual language.