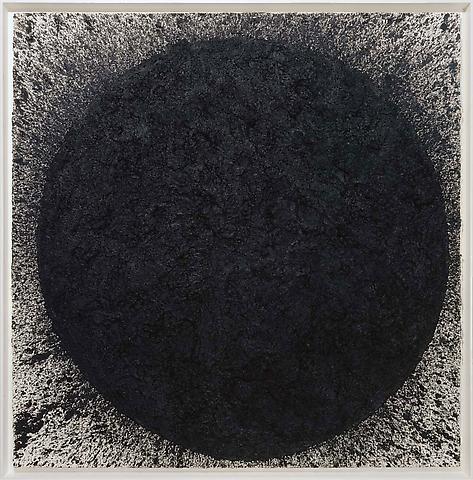 Image:RICHARD SERRA Baldwin, 2009 Paintstick on handmade paper 78 1/2 x 78 1/2 inches (199.4 x 199.4 cm)
April 9 – May 15, 2010 Gagosian Gallery
Throughout his career, Serra has made drawings not as precursors to sculptural works, but as separate, immediate, and fundamental lines of investigation, translating intentions into marks. His drawings are explorations in their own right, integral to the overall concerns of his sculptural practice, and unique intuitive explorations within their own established criteria.

Serra began working on Greenpoint Rounds in late spring of 2009. In these large-scale works which each measure 80 inches square, a large black circle is embedded in the surface of the heavy paper. Serra uses paint-stick, heating it to a viscous and sometimes fluid state. He slowly builds up the dense and irregular form so that each drawing has its own unique surface that appears as a palpable structure rather than a mere surface. Each drawing exerts a vastly different energy and exudes a singular character.

Richard Serra produces unparalleled large-scale sculptures, many of which are in major museums and private collections worldwide. Recent projects include the eight-part permanent installation The Matter of Time at the Guggenheim Bilbao (2005) and a survey exhibition at The Museum of Modern Art, New York (2007) twenty years after his first survey show there in 1986. In 2008 he installed Promenade, a course of five massive vertical steel elements, each towering more than fifty feet, at the Grand Palais in Paris for the MONUMENTA exhibition. In the same year, a survey of his drawings from 1989-2008 entitled “Richard Serra: Drawings–Work Comes Out of Work” was exhibited at the Kunsthaus Bregenz, Austria. A drawing retrospective organized by the Menil Collection will open at the Metropolitan Museum of Art in New York in April 2011, traveling to the San Francisco Museum of Modern Art in October 2011, and the Menil Collection, Houston in March 2012.