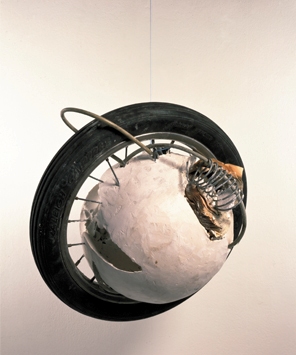 The remarkable archive of British artist John Latham (1921-2006) is explored through this exhibition inspired by his engagement with Fyodor Dostoevsky’s novel The Brothers Karamazov (1880). Each section is envisaged through the character of the three eponymous brothers. Mitya is an amoral and decadent sensualist; Ivan is an inflexible rationalist; and the youngest brother Alyosha is a kind and loving witness who attempts to relieve the suffering of others. They offer avatars for this celebration of Latham’s complex thought and work, presented through sketches, diagrams and photographs. Latham had a visionary outlook that questioned scientific thought. An important contributor to the Destruction in Art Symposium (1966) and a founder member of the Artist Placement Group (1966-89) he created performances, paintings, assemblages, sculptures and films. This apparently eclectic practice was united by his concept of Event Structures and Flat Time Theory. Through his experimental and radical work he linked science and art, proving influential in both fields.

Though a prominent figure from the 1960s onwards, the diversity of Latham’s work and the complexity of his ideas remain largely unknown beyond specialist circles. The exhibition explores the fundamental concepts that shaped his art, also including material from Flat Time House, the artist’s residency in South London and now home to the John Latham Archive.

John Latham: Anarchive is co-curated by Antony Hudek, Athanasios Velios, Research Fellows at Ligatus, University of the Arts, London, and Nayia Yiakoumaki, Archive Curator, Whitechapel Gallery. John Latham’s Archive is the subject of an AHRC research project developed by Ligatus Research Unit, UAL. With thanks to Elisa Kay, curator of the Flat Time House; and Anna Ridley of Annalogue Limited, commissioner of the Dadarama series.

The Whitechapel Gallery is grateful for the support of the John Latham Foundation; the Lisson Gallery; the Exhibition Circle, Richard Saltoun and those who wish to remain anonymous.