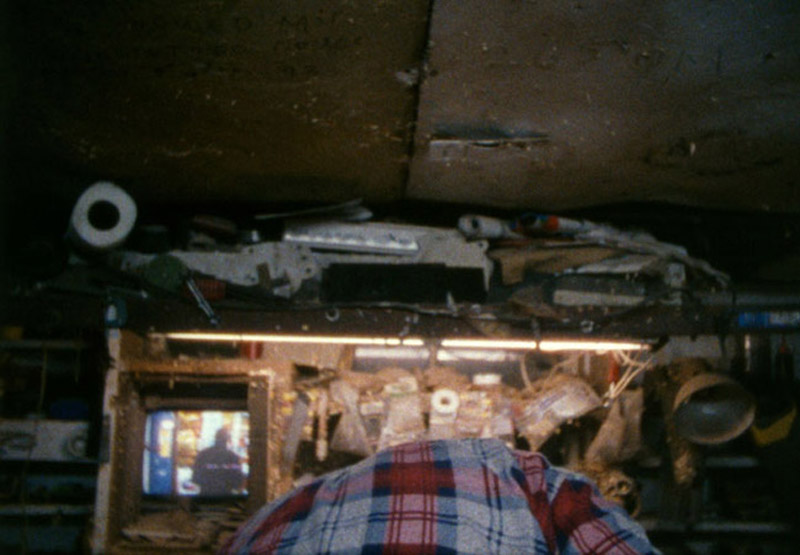 BEN RIVERS 12 March – 2 May 2010
For his first exhibition at the gallery Ben Rivers has assembled a dwelling from discarded and reclaimed building materials. Inside, his film Origin of the Species (2008) offers a clandestine portrait of an elderly man living in a ramshackle cottage in the wilderness of the Scottish highlands. The man devises his own technologies for day-to-day subsistence while pondering the workings of the universe and the scope of human knowledge. Although there seems a vast discrepancy between Big Bang theory and animal trapping, the voiceover forays into such grand universals as evolution and epistemology, bridging this gap through ruminations on the experience of nature.

Rivers’ film is made using an old Bolex camera, which imparts a quality that cannot be digitally constructed. At times the blissed-out end of a reel is left apparent as errant bursts of yellow and orange light obliterate the image. Scratches similarly draw us back to the film’s surface and emphasise the mechanical nature of its coming into being. Just as the man wonders at the destructive results of the too-quick evolution of the human brain, the near-obsolescence of film confirms this pace of change; and as his retreat from civilisation takes on the characteristics of an idyll, Rivers’ own shack reminds us of the awkward reality of this.

Origin of the Species is unflinchingly beautiful, without irony or sentimentality. As an artist working with film, though, Rivers is careful to put its nostalgic qualities to more testing use. His studies of the contingent lives of others are as much to do with investigative anthropology as they are utopian escapism.

Origin of the Species was funded by Arts Council England, London with the support of Film London Artists’ Moving Image Network. Thanks to Measure (uk)www.measure.org. and A Foundation, Liverpool.