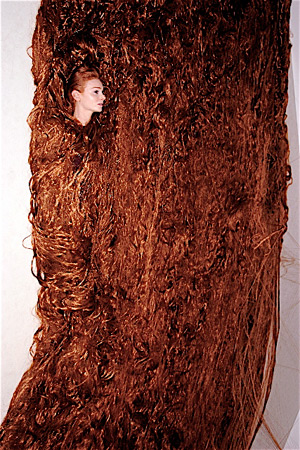 Riflemaker 79 Beak Street, Soho, London W1 2 March – 24 April 2010
The French/Algerian artist Alice Anderson (b.1976) will fill Riflemaker in Soho with thousands of metres of hair as part of an installation, including film, sculptures and photographs, based on fictional childhood memories from 1 March 2010.

Anderson considers time, or more particularly the way that time shapes itself, to be her most significant working material. For her, memories can be described as reconstructions, often distorted to the extent that each becomes a creation or fiction itself. She views memory as the ‘master of fiction’, whereby the passage of time may lead to a remembrance being more akin to fiction than fact.

Anderson uses wax dolls and puppets to reinvent her childhood through the re-imagining of her own memories. The exhibition at Riflemaker takes as its starting point the artist’s nine minute film ‘The Night I Became A Doll’ (2009), in which a young girl stops eating, moving and speaking before gradually transforming herself into a doll in order to please her mother. During the film we witness the mother’s futile attempts to communicate as the girl turns into a marionette. The film explores the theme of maternal rejection and is described as autobiographical by Anderson, who believes that autobiography itself can often be purely fiction.

In 2006, the artist worked with Madame Tussauds to make a 50cm wax model of herself. The completion of this project marked the beginning of an ongoing cycle of works including the photographic series, ‘Master Puppet’, featuring Anderson and her alter-ego in the film, The Dolls’ Day (2008) which takes its name from a 1915 children’s novel by Carine Cadby. The series continues with ‘The Night I Became a Doll’ adding sculptural elements within Anderson’s ‘Time Reversal’ at Riflemaker.

Alice Anderson was bought up in France. When she was aged three, her French-speaking Algerian mother and her English father separated. Anderson and her mother left England and she was forbidden from mentioning the country or her father again. It was then that she began storytelling and making paintings about her family. She later studied fine art at the Beaux-Arts in Paris and then at Goldsmiths in London from 2004. Anderson has said that she moved to London in defiance of her mother’s ban on speaking about England while growing up.

Alice Anderson’s work has been shown at Tate Modern, The Pompidou Centre, The Grand Palais, Leon Museum and Mudam Museum. Recently she installed three thousand metres of red hair through rooms at three different venues – the Picasso Museum in Paris, the Frac Paca and at the Marc Chagall National Museum – to form one gigantic installation called ‘Rapunzel’. At Riflemaker, the hair will leave the building through a window above the gallery’s entrance, re-enter through a window on the first floor and then be threaded down a chimney to create a circular loop running between the two main floors.

A catalogue to accompany the exhibition will include an essay by Marina Warner.