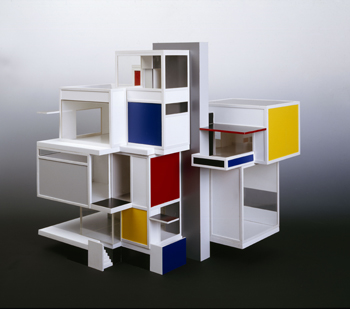 Tate Modern presents the first major exhibition in the UK devoted to the Dutch artist and pivotal figure of the European avant-garde, Theo van Doesburg (1883-1931). This is a unique and exciting chance for van Doesburg’s work to be seen for the first time in the UK. This follows in the footsteps of a series of exhibitions looking at different aspects of Modernism, conceived by Vicente Todolí, Director of Tate Modern.

Van Doesburg, who worked in disciplines within art, design and text, founded the far-reaching movement and magazine De Stijl. This artistic movement of painters, architects and designers sought to build a new society in the aftermath of World War I, advocating an international style of art and design based on a strict geometry of horizontals and verticals.

Van Doesburg travelled extensively in Europe in the 1920s making connections and collaborating with avant-garde contemporaries of the time. This exhibition explores Doesburg’s role as promoter of Dutch Neoplasticism, his Dada personality, his efforts to influence the Bauhaus, his links with international Constructivists, and his creation of the group Art Concret.