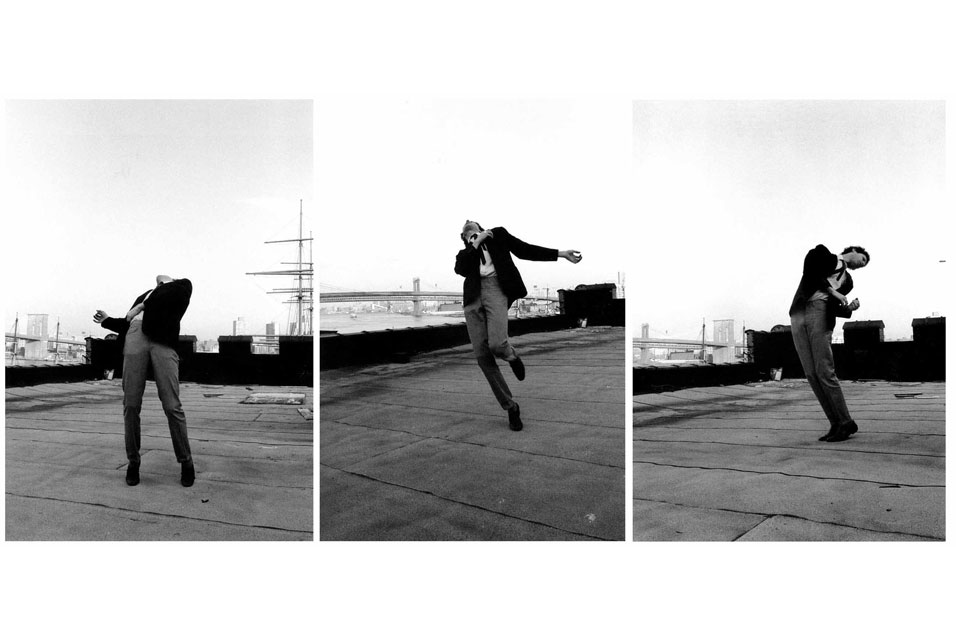 Metro Pictures “Ongoing Projects” brings together work by Robert Longo, John Miller and David Maljkovic. Longo exhibits fourteen photographs printed from the original 1970’s negatives he shot for his iconic “Men in the Cities” drawings. David Maljkovic is represented by his newest film installation, “Out of Projection,” that expands on his exploration of memories as futurist propositions. John Miller’s “Middle of the Day” project includes photographs produced over a fifteen-year period here presented on DVD with a compilation of more than 700 images.

This marks the first exhibition of the earliest photographs Robert Longo took as studies for his well-known “Men in the Cities” drawings of the late 1970’s and early 1980’s. The photographs taken in his studio and on the roof of his South Street studio were not made into prints but projected onto large sheets of paper. The photographs provide specific location and period to the large abstracted drawings that have permeated our media culture in everything from ipod ads to the opening credits of the TV series Mad Men. Views of Manhattan rooftops and the East River replace the white background of the drawings, and jeans, sneakers, and jackets replace the deep black of the figures’ suits. Longo elicited the now classic, contorted poses by verbally exhorting and tossing film canisters at the models who were artist and musician friends.

David Maljkovic’s new, 2-channel film, “Out of Projection,” references antithetical film genres—science fiction and documentary. “Out of Projection” was filmed at the carefully guarded test track of Peugeot headquarters in the French city of Souchaux. His use of Peugeot prototypes as props follows the artist’s past use of futuristic automobile prototypes in Croatian Modernist architectural settings. The primary, large screen in the installation shows the film’s protagonists, elderly couples who in the film build ideas for future projects. They are actual retired company workers who act as a medium between past and future, moving slowly around the test track alongside the car prototypes. The second, smaller projection is of close-up interviews with individual workers in silent recollection, eerily blurring the past and the future.

John Miller’s “Middle of the Day” project began in 1994 and continues to the present. The photographs document the artist’s location during the hours of noon and 2 PM, when there is little shadow and universally, people are on down time. These random images include bucolic landscapes, still lives, domestic interiors, street scenes, people and objects that all incidentally document the travel associated with an artist’s professional and personal life. These works have previously only been exhibited as color photographs, but for this exhibition Miller will show a compilation of hundreds of images in slideshow format on a flat-screen monitor, accompanied by a soundtrack he composed using ambient noises recorded in and around his home.

Robert Longo lives in New York. A survey exhibition of his work is on view at Musée d’Art Moderne et d’Art Contemporain, Nice until December 20 and will travel to The Berardo Museum Collection, Lisbon, February 1 – April 25, 2010. Previous one-person exhibitions include Hamburger Kunstverein and Deichtorhallen in Hamburg; Menil Collection in Houston; Los Angeles County Museum of Art; The Albertina in Vienna; and The Isetan Museum in Tokyo.

David Maljkovic lives in Zagreb, Croatia. “Out of Projection” is currently on view at the Reina Sofia in Madrid until January 18, 2010. Previous one-person exhibitions include The Whitechapel Art Gallery in London; the Kunstverein in Hamburg; and P.S. 1 in New York. Maljkovic had his first exhibition at Metro Pictures in 2008.

John Miller lives and works in New York where he teaches at Columbia University. One-person exhibitions include a retrospective this year at the Kunsthalle in Zurich; Center for Contemporary Art in Tokyo; the Kunstverein in Hamburg; Magasin-Centre National d’Art Contemporain in Grenoble; and P.S. 1 in New York. His work was included in the Whitney Biennials in 1985 and 1991 and he has exhibited regularly at Metro Pictures since 1984. Via:[ArtDaily]