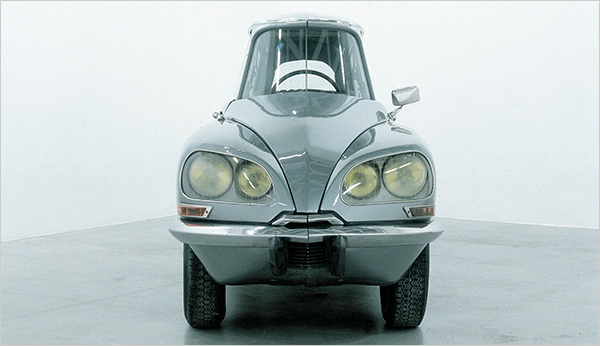 Mobile Matrix (2006), a monumental sculpture composed of a reassembled gray-whale skeleton, is installed on the second floor in the Museum’s Donald B. and Catherine C. Marron Atrium. Orozco was commissioned to make the sculpture by Mexico’s National Council for Culture and the Arts for its permanent home in the Biblioteca Vasconcelos in Mexico City. Its inclusion in this exhibition marks the first time it has been seen outside of that library. After excavating the bones from the Isla Arena in Baja California Sur, Orozco and a team of approximately 20 assistants used some 6,000 mechanical pencils to draw lines on the whale that relate to its structure. Dark solid circles are surrounded by numerous series of concentric rings that overlap and collide with each other.

Explains Ms. Temkin, “Orozco’s transformation of the concept of sculpture—via innumerable mediums and methods—makes him a central figure of his generation. Sixteen years after his debut in MoMA’s Projects series, this exhibition explores both the consistency and the surprising evolution of his artistic approach.”

Orozco was born in 1962 in Jalapa, in the state of Veracruz, Mexico, to Cristina Félix Romandía, a student of classical piano, and Mario Orozco Rivera, a mural painter and art professor at the Universidad Veracruzana. In 1981, Orozco enrolled at the Escuela Nacional de Artes Plásticas (ENAP), a division of the Universidad Nacional Autónoma de México (UNAM), from which he graduated in 1984. In 1986, to broaden his knowledge of contemporary art practice, Orozco left Mexico City for Madrid. There he enrolled in courses at the Círculo de Bellas Artes and, using Madrid as a base, traveled throughout Europe; but by 1987, he returned to Mexico City. He formed a workshop with other artists—Damián Ortega, Gabriel Kuri, Abraham Cruzvillegas, and Dr. Lakra (Jerónimo López Ramírez)—and worked with this group for the next five years.

Orozco spent the 1990s traveling to cities throughout the world, and many of his works are emblematic of the locations where they were made. Bringing together objects originally created for autonomous settings and contexts, Orozco and Ms. Temkin have conceived this exhibition as a new landscape. Rather than offering a chronological or linear account of Orozco’s body of work, this exhibition celebrates the experimentation that lies at the heart of his practice. Orozco’s works are variously cerebral and spontaneous, convivial and hushed, the result of painstaking planning and fortunate accident. The exhibition highlights the diversity of Orozco’s materials and the variety of his methods while presenting an oeuvre that is unique in its formal power and intellectual rigor.

Art and life combine in Orozco’s work. Shown for the first time outside Mexico, a new work titled Eyes Under Elephant Foot (2009) is made of a section of a Beaucarnea tree trunk into which glass eyes have been set. To create My Hands Are My Heart (1991), the artist squeezed a ball of clay between his two hands, forming a heart-shaped object that reveals the process of its making. Rather than using a fine-art material, Orozco used clay made in a brick factory in Mexico. Like many of his early works, this object proceeds from a modesty of materials and simplicity of gesture, reducing the act of sculptural creation to its bare but potent essentials. Nearby are two photographs showing the artist with My Hands Are My Heart, exemplifying the close relationship that exists between photography and sculpture in Orozco’s work.

Among the works recreated here, only one is presented in a way that echoes its original installation: Yogurt Caps (1994), which was first shown in Orozco’s debut exhibition at Marian Goodman Gallery in New York in 1994. Four blue-rimmed Dannon yogurt lids affixed to four otherwise empty walls punctuate the visual field so minimally as to be barely perceptible; by demarcating the perimeter of the gallery, Orozco’s intervention throws the emptiness of the room into focus.

For many of his sculptures from the 1990s, Orozco altered ready-made objects, such as an elevator, a car, or a bicycle. Without concealing the original object’s function or transforming its principal identity, he instead heightened its defining characteristics. La DS (1993) is a streamlined version of the already sleek Citroën DS, made in Paris, where the cars were manufactured. Orozco cut a 1960s model in thirds lengthwise, removed about two feet of width from the center, and reassembled the two remaining sections to create a version of the original that exaggerates its aerodynamic design.

Photography has been an essential component of Orozco’s practice throughout his career. There are images of objects he manipulated into sometimes poetic or humorous assemblages, and straightforward pictures of ready-made sculptural situations just as he found them. Until You Find Another Yellow Schwalbe (1995), comprising 40 color prints, is Orozco’s lighthearted diary of his travels around Berlin. While riding his own yellow Schwalbe scooter—a popular motorbike produced in East Germany during the 1960s—he searched for other yellow Schwalbe scooters. Orozco parked his scooter next to nearly identical ones as he found them, and photographed them, eventually forming the series of 40 prints. By photographing these East German relics that punctuate the landscape of a unified Berlin, Orozco invokes Germany’s divided past.

In 2004, Orozco began to paint circles first on canvas and then on wood. Using a computer and drafting software, Orozco created a design template for a large series of paintings collectively titled Samurai Tree Invariants (2004, ongoing). Every panel in the series features four colors (gold, white, red, and blue) distributed across the canvas based on the movement of a knight in a game of chess. Alongside the Invariants, Orozco has also produced a body of paintings, such as Kytes Tree (2005), whose compositional structures are unique to each work. Also on view are works like Fertile Structure (2008), made with graphite on a plaster-primed wood support. Melding painting and drawing, this recent work acknowledges the origins of Orozco’s painterly enterprise while suggesting the possibility of endless variation.

The provisional objects of Orozco’s Working Tables, 2000–2005 illustrate the artist’s hand and mind in action, and provide an intimate look at his working process. The tables display prototypes for finished works, the beginnings of projects never realized, and found objects the artist kept for one reason or another—all things on their way to becoming sculpture. Several of the objects included in Working Tables, 2000–2005 relate directly to the finished sculptures, such as Floating Sinking Shell 2 (2004) and Double Tail (2002).

The exhibition will travel to three other museums after MoMA: Kunstmuseum Basel (April 18 to August 10, 2010); Centre Georges Pompidou, Paris (September 15, 2010, to January 3, 2011); and the Tate Modern, London (January 19 to April 25, 2011). Each exhibition will be a uniquely designed collaboration between the artist and the institution where it is presented.