GO SEE:Ultramegaok at The Framery through to Sunday December 20th - FAD Magazine
Skip to content 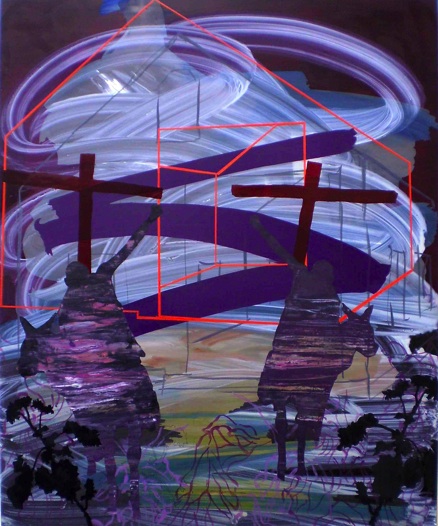 Ultramegaok brings together 3 emerging British painters in an exhibition at the ‘pop up space’ The Framery, a disused office within spitting distance of Hoxton Square’s galleries and bars. Matthew Atkinson, David Northedge and Andy Wicks each reference a moribund and derelict world within their work yet beyond the darkness lurks a nostalgia and warmth.

Ultramegaok refers to Soundgarden’s 1988 debut album (Ultramega OK), an album full of youthful enthusiasm which singer Chris Cornell later stated, “we really liked the songs on that record but we were disappointed in the production. We were sort of making fun of the finished product”.

Even during a global recession the numbers of artists looking to exhibit is as competitive as ever, in an art world where space is hard to come by, the falling of banks and gloom for businesses has given rise to the pop up space with artists taking advantage of the climate and showing their work any which way they can. With this exhibition the artists are forgoing the gallery system and its glossy production values to show works fresh from the studio in its unadulterated state.

In an ironic twist, many of these paintings relate to space, whether it’s physical, personal or emotional. The spaces created or revealed in these works may no longer exist having been a passing memory revived in the moment by brush mark, or erased from their physical landscape as an unwanted reminder of our past, creating new space and profit.

Matthew Atkinson presents a new body of work entitled ‘NeverNeverWorld’ in which curious and whimsically created landscapes sourced from Disneyland Tokyo are imbued with a deliberate sense of the ‘Grand Style’. Promoted by the Royal Academy the grand style was considered the most elevated form of art, dealing with moral themes in the universalizing language of classical idealism. The Landscapes depicted are found in Disneyland’s Critter Country. These are seemingly vacuous themed structures, albeit, created to provide a different and novel experience that transports the public into another world; ‘NeverNeverWorld’. Themes provide a veneer of meaning and symbolism, infusing this in the structures is deemed to make them more attractive and interesting than they would otherwise be. In doing so Disney creates a falsifying veneer of historical meaning and purpose that does not in reality exist. These paintings explore ideas of Disneyfication and Disneyization to communicate and convey the wider political debates and criticisms surrounding Disney’s autonomous (NeverNever)World.

David Northedge creates paintings formed of images which are primarily taken from art history, glossy magazines, medical books and other found resources. The images are built into each painting a layer at a time often on a large scale resulting in an excessive cocktail of the lurid and superficial. Themes of vanity and desire are delivered in slick surfaces which are the antithesis of the smaller works which expose the scaffolding of these airbrushed dreams.

Andy Wicks’s work takes reference from by concrete and steel, weather systems, rust, and decay, the pieces are executed through a gestural technique which involves the dripping of liquid veils of paint contrasted with thicker applications of oil. The weeping paint serves almost as a reverse-wash, a tear-stained window through which we see geometric forms that float ominously. These painting take iconic but unsightly buildings and reinvents their bold hulking forms as semi abstracted silhouettes set against a rusting landscape. The loss of context and surrounds simultaneously harshens and softens their architectural power, without modern new builds or empty wasteland to compete with, these piercing form become timeless in an acid dream. Wicks’ paintings have their titles taken from the list of Atlantic Hurricane names, which imbues each piece with a gender, life and a personality of their own while this arbitrary system disguises each pieces real world point of reference.