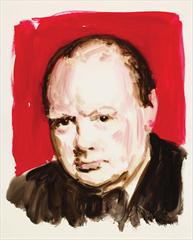 Kevans takes the allegory ‘Ship of Fools’ as the title for her latest series of paintings which addresses her interest in the changing perception of madness and its relationship with societal notions of success and achievement.

Towards the end of the Middle Ages, European authorities would deal with their mad denizens by handing them over to mariners, sailing them to foreign ports where they became someone else’s problem. The term ‘Ship of Fools’ has long since been used in Western art and literature to describe society without direction or heading for disaster. From Sebastian Brandt’s poem of 1494, to the film starring Vivien Leigh (who was herself given electroconvulsive therapy for manic depression), ‘Ship of Fools’ has been employed to title a multitude of paintings, films and songs.

Despite the fact that 1 in 4 people will experience some kind of mental health problem in the course of a year, it is still stigmatised and this is the conceptual inspiration behind this exhibition. The list of the great and the good with varying degrees of mental illnesses is seemingly endless and sometimes surprising. Examples include Winston Churchill, Michael Jackson, Kirsten Dunst, Jackson Pollock, Drew Barrymore, Charles Dickens, Yves Saint Laurent, Albert Camus, Beyonce Knowles, Ewan McGregor, and Mark Twain. Kevans is also interested in the trend of post-diagnosing people long after their death.

As in much of Kevans’ work, the idea of truth versus fiction features in the series. Diagnosis in itself is often based on opinion. Anyone proclaiming themselves to be the son of God now is seen to be mad, but two thousand years ago Jesus did just that. In the 1920s, the American public would be drawn into the strange fantasy world of Opal Whiteley. A young woman from Oregon, she claimed to be the kidnapped daughter of the Duke Henri Prince of Orleans, a descendant of the French royal family. Another of her claims was that she could communicate with animals and trees. Her childhood diary was a bestseller in America and the public believed it was proof that her story was true. Eventually diagnosed with schizophrenia and admitted to Napsbury Hospital,she died in 1992 but was buried in Highgate cemetery as HRH Francoise Marie de Bourbon D’Orleans.

Kevans believes “perceptions of one’s mental stability are dictated by time, place and belief systems. The days of Opal Whitely and the Cottingley fairies seem long gone, but are they? While today we dismiss those who claim to be ‘the son of God’, religion retains a special status in most societies. We are happy to diagnose Leonardo Da Vinci and Beethoven but draw the line at Jesus”. She aims not to belittle religion but to question our verdicts on history and perceptions of intellectual solidity.

Stylistically, Kevans’ semi-translucent paintings possess an ethereal, slightly melancholy quality. It is interesting that her paintings are achieved not by using watercolour as one might expect, but thinned oil paint on canvas paper. Kevans has a fascination with varying trends that connect public or historical figures. The subjects of her paintings provoke feelings of familiarity and nostalgia, but the new method she employs gives the paintings a wholly unique appearance. Her precocious talent was first recognised by Charles Saatchi, who bought her entire BA collection ‘Boys’. The works in another series ‘Girls’ see teen stars such as Avril Lavigne and The Olsens take on an almost eerie appearance, their wide-eyed naivety counteracted by sensuously plump red lips and semi-nudity. Kevans’ paintings manage to be individually stunning but are also cohesive. Her work uses a muted colour palette, which is in contrast to the occasional bold colour plane of the background.

‘My paintings reflect my interests in power, manipulation and the role of the individual in inherited belief systems. It is important for me to examine the duality of truth and falsehood throughout my work, which I do by creating ‘portraits’ which may or may not be based on real documentation. I believe that a person’s identity as is not preset but is a shifting temporary construction.’

The exhibition will present a large collection of new paintings, some of which have already found their way into museum and private collections. The private view for clients and press will be held on ‘The Golden Hinde’, a Tudor ship docked near the Tate Modern on Thursday 26th November. The exhibition will then transfer to the gallery, opening the next day at 2pm.

Annie Kevans was born in France and graduated from Central St. Martins in 2004. Forthcoming shows include the Perry Rubenstein Gallery, New York and she will be featured in the much anticipated ‘Power of Paper’ show at the Saatchi Gallery next year. Annie was the finalist in the ‘Women of the Future’ award in 2007 and the year before she was also the finalist for the Jerwood Drawing Award. Annie Kevans’ work can be found in major collections, including the Saatchi Collection, the David Roberts Collection, 21c Museum and the collections of Lord Rothermere, Marc Quinn, and Marion & Guy Naggar.