'Harun Farocki. Against What? Against Whom?' at Raven Row Gallery Wednesday 18 November, 6–8.30pm - FAD Magazine
Skip to content 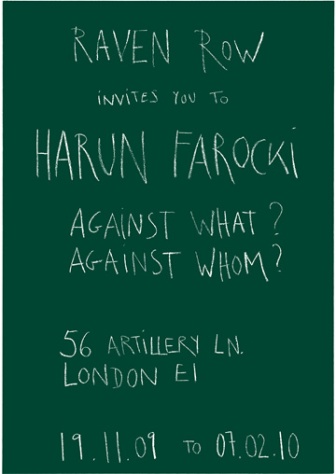 19 November 2009 to 7 February 2010
This is the first UK exhibition of the two-screen and multi-screen works of revered German filmmaker Harun Farocki. The survey comprises nine video installations, from his first two-screen project Interface in 1995 to Immersion, 2009, about the use of virtual reality in the treatment of traumatised US soldiers following the occupation of Iraq.

Since the sixties, Farocki (born in 1944, living in Berlin) has reinvented what can be described as the film essay. Beginning as an argument (often about the effects on the individual of capitalism, consumerism, technology or war) his films digress associatively and poetically, becoming open-ended rather than polemical. Farocki’s films also reflect on the way in which our culture constructs photographic and moving images, and the uses to which these images are put.

In the mid-nineties, Farocki began making films for two, and occasionally more, screens. Above all, this enabled him to use images to comment on images. These films address the critical engagement of viewers at large in an art gallery.

This project is linked to ‘Harun Farocki. 22 Films 1968–2009’ a season of single-screen films and events at Tate Modern, 13 November–6 December, curated by Stuart Comer, Antje Ehmann and the Otolith Group. www.tate.org.uk/modern

A monograph Harun Farocki. Against What? Against Whom? has been commissioned by Raven Row. It is edited by Kodwo Eshun of the Otolith Group and Antje Ehmann, published by Koenig Books, and will be launched during the course of the exhibition.
www.ravenrow.org