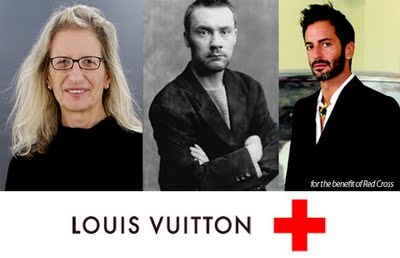 The luxury brand Louis Vuitton, synonymous with the art of travel and highly qualified craftsmanship, collaborates this year with six masters of savoir-faire and creates six limited-edition Special Orders to benefit the ‘Red Cross’. Sotheby’s London will co-host the gala charity sale of these unique special pieces at its New Bond Street premises on November 17th, 2009. The proceeds from the auction will be donated to the Red Cross for their Fight against Malnutrition program in Nigeria.

Since its creation in 1854, Louis Vuitton has offered customers the possibility of producing Special Orders to cater a specific need or to fulfill a particular desire. In order to celebrate over a century and a half of exceptional savoir-faire at Louis Vuitton’s first workshop in Asnières, France, Louis Vuitton offered six masters of savoir-faire the opportunity to create a unique Special Order that embodies their exceptional expertise in their respective professions. The six personalities are the artist Damien Hirst, the chef Ferran Adrià, the photographer Annie Leibovitz, the musician and composer Gustavo Santaolalla, the designer Marc Jacobs, and Patrick-Louis Vuitton, the head of Louis Vuitton’s Special Orders department and a member of the fifth generation of the Vuitton family. Each piece was designed by Patrick-Louis Vuitton in collaboration with the personality.

Uniting tradition and modernity, these pieces are testament to Louis Vuitton’s savoir-faire in the domain of Special Orders. Ranging from hard-frame to soft-sided, they are interpreted in a variety of materials, from Monogram and Damier Graphite canvas, to Nomade leather and alligator. In addition to the six unique special orders created by the masters of savoir-faire, the auction will also include a limited-edition Red Cross medical trunk, crafted by Louis Vuitton to commemorate the 150th anniversary of the Red Cross. These Special Orders will have travelled the world to cities such as Mexico City, Hong Kong, Tokyo, Dubai, Seoul and New York between July and November 2009, for a series of exclusive viewings by clients of Sotheby’s and Louis Vuitton.

Discussing this charity auction, Yves Carcelle, President of Louis Vuitton said: “For over a century and a half, Louis Vuitton’s Asnières workshop has been the living symbol of the company’s unique combination of tradition and innovation. To mark this important anniversary, Louis Vuitton will celebrate ‘l’Excellence du Savoir-Faire’ through its heritage of Special Orders by partnering with some of today’s iconic figures who themselves possess a rare expertise.”

Cheyenne Westphal, Sotheby’s Chairman of Contemporary Art Europe, commented: “We are thrilled to host this gala dinner charity auction in November, the proceeds of which will benefit such a worthy cause. The auction will showcase pieces created by some of the most talented individuals in their respective professions and the sale of these limited-edition pieces will no doubt generate tremendous excitement and interest.”
www.sothebys.com/