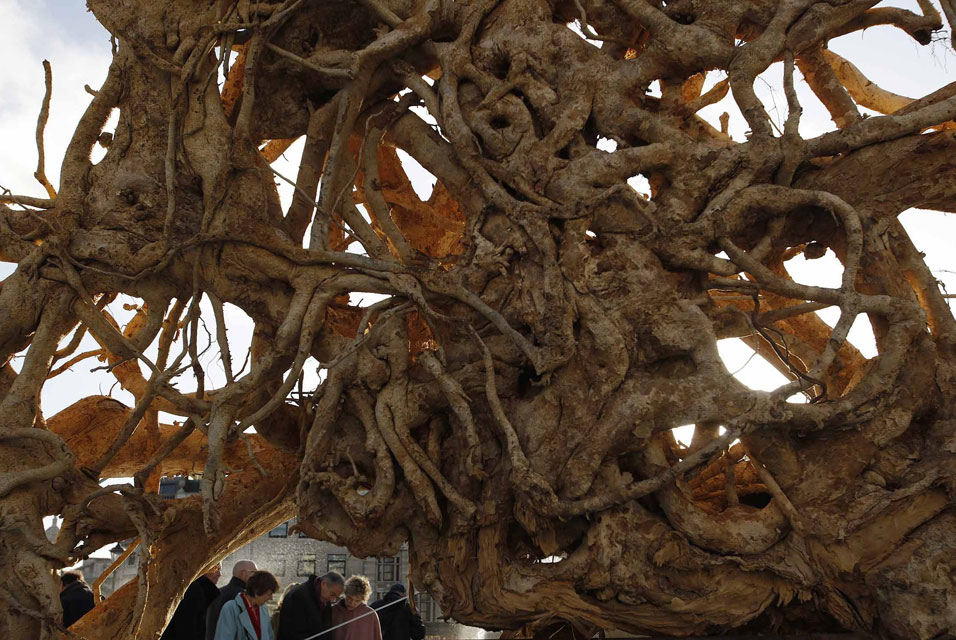 Trafalgar Square has been inhabited by a series of large rainforest tree stumps, many complete with their buttress roots, transported from a commercially logged tropical primary forest in Western Africa. The installation, entitled ‘Ghost Forest’, is the vision of artist Angela Palmer, and its intention is to inspire and provoke debate about the future of the world’s rainforests.

The installation stands in Trafalgar Square for one week, between 16-22 November, before moving to Thorvaldsens Plads – a city centre square in Copenhagen – to coincide with the UN Climate Change Conference from December 7-18.

Trafalgar Square is a particularly appropriate location: with Nelson’s Column standing at over 50 metres (169 feet) tall, it is the approximate height many of the ‘Ghost Forest’ trees would have stood at in the forest. In Copenhagen, the Ghost Forest stand as a symbol of threatened rainforests throughout the world, as 11,000 delegates from 192 countries debate their future.

The trees, of nine different species, were sourced in the Suhuma forest, Western Ghana and shipped to Tilbury Docks in East London as part of a huge logistical undertaking. The artist originally planned to exhibit the tree stumps upright, but on seeing the roots exposed and cleaned of soil ‘it was like seeing the nerve endings of the planet.’ The tree stumps will lie on their sides on plinths in Trafalgar Square: ‘I want to elevate the rainforest literally and metaphorically, like Nelson.’

Angela Palmer began her epic journey to bring the rainforest trees to England after a discussion with Andrew Mitchell, director of the international scientific alliance the Global Canopy Programme and an adviser on rainforests to Prince Charles. ‘He alarmed me with statistics: a tropical forest the size of a football pitch is destroyed every four seconds, meaning an area twice the size of Belgium is lost every year. The government’s then chief scientific adviser said climate change was a greater threat to humanity than terrorism. The decision to do something was easy; the logistics have been a nightmare.’

The artist chose to source the tree stumps in Ghana, which over the last 50 years has lost 90 per cent of its primary rainforests. Ghana is now determined to preserve what is left, and is at the vanguard of responsible and sustainable forestry. Its remaining forestry concessions are selectively logged under strict regulations, which allows the retention of the forest canopy, the natural regeneration of the forest, and a viable and sustainable timber industry for local people. To reflect this, only a couple of trees in Ghost Forest have been logged, the rest are naturally fallen. ‘This is not yet another message about climate change “doom and gloom”‘, says the artist, ‘It carries a message of hope and optimism for the future’.

The main sponsor for the installation is Deutsche Bank. Of the bank’s involvement, Deutsche Bank’s Colin Grassie, CEO, UK said, ’Our pledge to the ‘Ghost Forest’ project reflects the bank’s continued commitment to the issues surrounding climate change. The installation captures the imagination, while making a bold visual statement about need for action and cooperation globally.’

Angela Palmer was educated at The Ruskin School of Drawing and Fine Art in Oxford, and The Royal College of Art in London. She currently has an exhibition entitled ‘Breathing In’ at the Wellcome Collection in London, which records her trip to the most polluted and cleanest places on Earth (until November 22). She is represented by Waterhouse and Dodd, Cork Street, London, which will exhibit film and photographs recording the ‘Ghost Forest’ journey from November 16 – 20.

The artist considered carefully the carbon footprint which would be incurred in the project, but felt its potential message to millions of people on the impacts of deforestation would outweigh the carbon ’spend’. The carbon cost of ‘Ghost Forest’ will be calculated and offset on a ClimateCare project which has introduced more energy efficient cooking stoves to Ghana, meaning fewer trees are needed to provide cooking fuel.

The trees used in Ghost Forest were sourced and identified with the help of Ntim Gyakari, the former Curator of the Herbarium in Kumasi, Ghana. The Greater London Authority has granted permission for the staging of the installation in Trafalgar square.