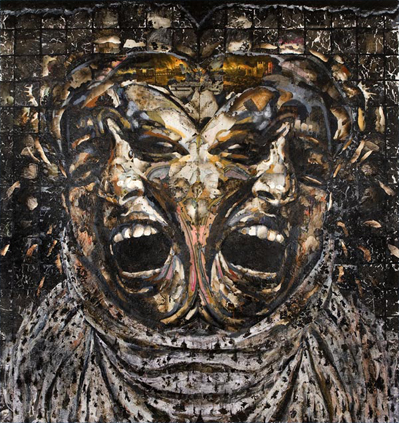 No Two Burns Are the Same 6 1/2′ x 6’Burnt Paper with mixed media on canvas 2009
Ali Raza received his MFA in drawing and painting with a minor in Art History from the University of Minnesota, Minneapolis in 2001. After graduation, he started teaching in the university as an adjunct professor and taught drawing and painting for two years. In 2004, he moved to Boone, North Carolina to join Appalachian State University, where he is now working as an Assistant Professor and coordinates the painting department.

Ali lives and works between USA and Pakistan. He works primarily in painting but he has worked in other disciplines such as drawing, printmaking and sculpture.

He is partaking in a show Hanging Fire: Contemporary Art from Pakistan from September 10th 2009 – January 10th 2010 at Asia Society, New York.

Reem Fekri: There is an incredibly engaging aesthetic that has been developed within your older work, which involves a collection of images, often of a political nature commonly found within the media. Stereotypical images that often represent the ‘East’ within the ‘West’ such as guns, military and Bollywood stars seep through incredibly large canvases that often create a ‘collage’ effect. Do you work with notions of political uncertainty and stereotyping within your artistic practice?

Ali Raza: My work has been changing over time; there has been no constant theme of my work apart from the notion of change itself. The works you have mentioned in the question are done in 2006-08. At that time, I was working with multiple layering of disjunctive painted imagery. I was interested in quoting already seen or exhausted images by the media in my work. That work was never pre-scripted but evolved spontaneously. But now I prefer to plan before starting an idea, probably it is because of the nature of work and the medium that I am dealing with.

To me, every image is like a codification of an idea and every culture reads that code differently. I think, paradoxically, we are all responsible and victims of stereotypes. Stereotypes are either our inability, or disinterestedness in understanding the other. For a Pakistani living in a remote village, who has never been to USA probably image of USA is very close to what is seen through Hollywood or “Baywatch”. Same goes for an American who is not familiar with Pakistani culture. They probably think that Pakistan is the placewhere only Taliban roam around.

Lets just be objective and analyze which visual codes (images) represent such a lack of inability or misunderstanding of others, around us. The whole international scene is full of such misunderstandings. I think, it is a myth that any concept originated in one language or a culture can be completely translated to another language or a culture, without losing anything. But at least making an effort to attempt this cross-cultural translation should not be taken only as negative phenomena. On the positive side of this inability to translate, one might be initiating the process of hybridization. The word global is much more complicated than we think of it. We should be aware of the difference between “inter-national” and “inter-nationalism”.

RF: Your work depicts harsh realities on the surface, yet beneath these ‘initial’ images a utopia is blended in under the surface (i.e. Your Body is an Extension and Cleaning Supplies). What is the significance of these imaginary utopias?

AR: Main inspiration of this utopian imagery is coming from the folk art on three-wheeled rickshaw in Quetta, Pakistan. A few years ago, my wife Samina and myself did some documentation of this quickly vanishing art form. We both were really impressed by rickshaw painters’ professionalism and skill. Their imagery is based on the sheer naïve utopia. It was so fascinating, how they juxtaposed disparate symbols of peace and aggression together, which apparently do not make any sense but do make an eye-catching unusual image.

For example, in one of the visual, a very colorful naïvely painted valley has an inset of cobra gunship helicopters flying in the sky or in a similarly a naïve colorful landscape, we see the presence of two male peacocks, facing each other like lovers. I wonder if there is any codification intended indeed, or is it just me over-reading these visuals. I was also taken aback with the fact that they regionalize the westernized characters like gladiators,Tarzan (Jungle boy) or Sheena (the fictional queen of the jungle).

I also think the whole idea of these naïvely painted landscapes in rickshaws and truck art of Pakistan is a form of stereotyped visualized utopia probably originated with interest in myths and collective cultural sub-consciousness.

RF: You argue that you try to refrain from binding yourself to a signature style, and more recently you have burnt paper ashes to create images rather than using paint. This has changed immensely from diverse and often political subject matters to everyday static images (such as a chair or a book). What developed this change?

AR: For me, signature style art-making is like bonding labor (I am not saying that it applies to everyone). What I am saying is that I cannot simply bind myself to keep my identity as an artist associated with a certain style or medium. I believe in evolution of my work and when it evolves, it has to go through change. I prefer improvisation to acknowledged style.

Signature style or recognizable style artwork thrives on promises of the consumerism in art. For instance, all the works produced by one established artist are always not same. Some works are more interesting than others but if an artist has a name, a collector sees the name not the quality of the work. I really admire the artists who keep improvising their art and make the art market follow them rather than vice versa.

However, making these recent collage works with burnt paper or paper ashes is a deliberate move. Recently, I got interested in the character of a medium that comes with a charged notion. To me, ashes represent an end or remains of disaster, a frail state of physicality, a proof of transformation, anger, protest, fragmentation and much more.

I have always been intrigued by the medium that actively engages itself in the overall readability of an image. This is not the first time, that I am using collage. I have been working in collage since 1998, when I moved to USA. Earlier, I was using commercial advertising (junk mail) by cutting it in shapes like circles and square cutouts (reminiscent of digital pixels). Later, I started using a paper shredder. I started making visuals with shredded pieces of junk mail; it was my way of recycling the unwanted and overwhelmingly tempting information of promising consumerist utopia.

In my current work, I use the same material but in the form of ashes. These ashes to construct images is an attempt and hope to see a new beginning, rather than just claiming an end of something.

RF: Within your more recent work you burn paper from all types of magazines rather than any specific ones – and in many areas of the finished piece the text is largely readable. Is there a particular reason for this?

AR: First of all, the printed information remains somewhat readable after burning, and second, it is the character of the medium that I like. This work offers fragmented readability for those who come close to experience the surface of these images.

I think fragmentation is an important aspect of the statement of my work. The burnt frail pieces of text and images that I collage in my work are an attempt to re-collect memories in a random order to claim what is left and something missed in the process of transformation.

RF: Is the continuous political upheaval in Pakistan influencing your work? Who or what are your largest influences?
AR: Memory works best with the association of place. Although, I have been living in the USA I must admit that even after living here for the last ten years, I could not develop detachability with Pakistan or the South Asian living style in general. I do not want to lament like a nationalist or artist in Diaspora as I live between USA and Pakistan by choice, because I enjoy different aspects of both places. I am only trying to explain that who I am today is because of my living experiences and interest. If the current socio-political upheaval of Pakistan is felt in my work, it is because; these days all the time, I try to stay aware of what is going on there.

There is a long list of artists whose work, I appreciate for different reasons. But I would like to mention, one artist in particular, who influenced me the most, is one of my mentors, Zahoor Ul-Akhlaq (1941-1999). He has been in fact the most influential artist for my generation of Pakistani artists. Currently, I am revisiting Zahoor’s work with a different perspective and what I like most about his work is the constant improvising and synthesis of diverse ideas with a great ease and subtleness.

Right now, my biggest challenge as an artist is how to make work that appears simple but not as simple as it initially appears. In other words, how to deal with complexity and simplicity simultaneously? I must also mention that influences come from everywhere. For example right now I am addicted to A. R. Rahman’s and Nusrat Fateh Ali Khan’s music. I listen to them all the time while working in my studio, and I am sure on a subconscious level, their music is influencing my work too!