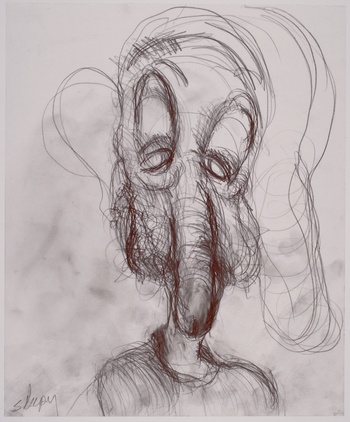 WHITE SNOW at Hauser & Wirth New York will be comprised of two sets of drawings made by the artist since late 2008. The first is a selection of diminutive black and white pencil works as detailed, atmospheric and unapologetically lovely as Old Master drawings. Here, McCarthy develops his characters – the young Snow White masturbating in a solitary romantic reverie, various phallic-nosed dwarfs in a dither at the arrival of the beautiful stranger in their midst – as players in a sly yet poignant coming-of-age narrative packing a metaphorical wallop. The images touch upon myriad dark associations invited by the Snow White tale while simultaneously suggesting a love story with profound personal resonance for the artist.

By turns heartbreaking and wickedly witty, these intimate works provide the foil for a second set of images – more than a dozen massive drawings, ranging in height from 7 to 10 feet and incorporating pages torn from auction catalogues, illustrated books, tabloids and pornographic magazines. McCarthy created these enormous, fiercely gestural and unstintingly funny drawings through a performative process – walking around and into his picture plane, coming from different directions toward paper stretched out on specially constructed tables while intermittently speaking aloud “in a sort of trance”, in a recorded monologue of words and sounds.

One of the few exhibitions ever to focus exclusively upon Paul McCarthy’s drawings, WHITE SNOW provides rare access to the initial stages of exploration that fuel the work of one of America’s most challenging and influential artists. McCarthy’s early investigations into his characters always occur through repeated and even compulsive sketching, a process that reveals layers of connections – in this case, connections between Snow White and icons of femininity as diverse as Venus, the Mona Lisa, the classical high art nude and an array of expertly packaged celebrities who populate our movies and tabloids, as well as people from the artist’s own life and private fantasies – and will ultimately give rise to sculptures, installations, a film and other works over time.

With their antecedents in his now famous 1992 Heidi collaboration with the artist Mike Kelley, the new WHITE SNOW drawings shift the Heidi narrative back to the New World where McCarthy has been inspired by impressions of the deep forests and magical clearings on his own property above the Mojave Desert and books about Disney’s version of Snow White given to him by friends. Weaving his ideas about these and other influences together, he has embarked upon an investigation of the culture that generates and embraces mass-produced images – and of artmaking itself. “It’s more about making than telling,” McCarthy has said. “Drawing is a form of analysis. I’m not controlling it, just allowing it to unfold. It’s not about clarity, it’s about each piece suggesting the next one in a continuum.”

The WHITE SNOW exhibition simultaneously introduces McCarthy’s ambitious long-term plans for his theme and vividly reveals the deep complexities of his varied agenda. The drawings on view at Hauser & Wirth New York extend his hallmark critique of our most stubbornly held and hypocritical societal norms. But while McCarthy continues here to polish his funhouse mirror onto the contradictions of Hollywood-generated fantasies and cherished American notions of purity and decency, he also opens – perhaps more widely than ever before – a window onto the deeper regions of his artistic discipline and his psyche. The large WHITE SNOW drawings, with their bold, sweeping lines and structural rigor, are simultaneous celebrations and critiques of monumental painting and its aggressively male heroes; he duels overtly with such titans of Modernism as de Kooning, Rauschenberg and Twombly, appropriating their visual language while subverting it. At the same time, McCarthy’s drawings contain worlds of self-reflection, with memory as the artist’s constant co-author.

“WHITE SNOW is a history, and some of that history is a self-portrait,” he has said. “The longer you live in the world the more you transpose present and past. At times, the past becomes the window you travel through, the window between the present and past, and things become more layered. You aren’t in the past but you are thinking about it. This [work] is not just about the story of Snow White, it’s a story about a lot of things. It’s about art, it’s a love story. I don’t have a concrete answer about what it is and I’m not looking for one. I don’t look for art to provide answers. I do something and it takes me to the next thing and the next after that.”