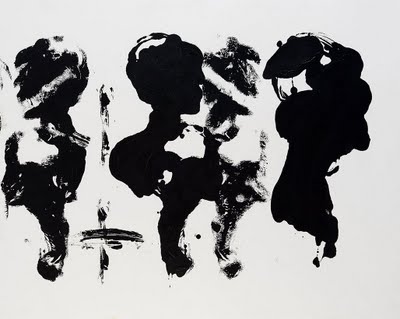 Operating through a combination of intention and accident, McVeigh’s new work has a vivid immediacy which celebrates the potential of the medium to suggest, rather than define, possible readings. In a series of large scale monoprints, the black acrylic, rich and tactile in its material presence, is coaxed into yielding interpretations that refuse to settle. Through a combination of drawing, gesture and chance, the works pulse with a vital, contagious energy, oscillating between abstraction and figuration.

In the collages, this fertile indeterminacy keeps the viewer busy through a free association of word and image, untethered from their source and made to speak in tongues. Also showing are works on found paper. McVeigh isolates pages from sources such as sailing manuals, old encyclopaedias and book keeping ledgers and assaults them with drawing or mark-making, prompting dialogues through obliteration and accretion.

At first glance, the pieces may appear simple in their resonant immediacy but are, in fact, remarkably complex. McVeigh’s practice involves instinctively creating ‘in the moment’, responding to and activating the materials at hand through cutting, pasting, drawing, tearing and painting. The apparently austere colour scheme further reinforces the impact and physicality of the work.

Whitney McVeigh, curated by Sotiris Kyriacou, will coincide with Frieze Art Fair. A catalogue with text by JJ Charlesworth will accompany the exhibition.

McVeigh’s work is currently on show at the NY Arts Pavilion at the 53rd Venice Biennale until 22 November.

Born in New York and resident in London, Whitney McVeigh has travelled extensively for her work, with significant periods spent in Europe, India and China, where she was artist in residence with NY Arts in their Beijing space. In 2006 she attended the Salon of Louise Bourgeois in New York where she gave a talk about her current work. She has exhibited in the UK and internationally in both solo and group exhibitions. In 2008 McVeigh exhibited with Saatchi Online at Form Art Fair and in Concrete and Glass (curated by Flora Fairbairn). Whitney McVeigh was recently nominated for the Sovereign European Art Prize by Rebecca Wilson, Head of Development and Editor, Saatchi Online.
A foundation