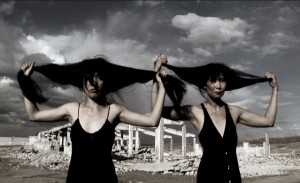 Re-Imagining October Curated by Mark Nash and Isaac Julien 2 October – 6 December 2009
Calvert22’s third exhibition is Re-Imagining October, curated by Mark Nash, writer and curator, and Isaac Julien, artist and film-maker. The exhibition will feature work by both emerging and established artists from Russia and Eastern Europe, all of whom include the moving image in their artistic practice.